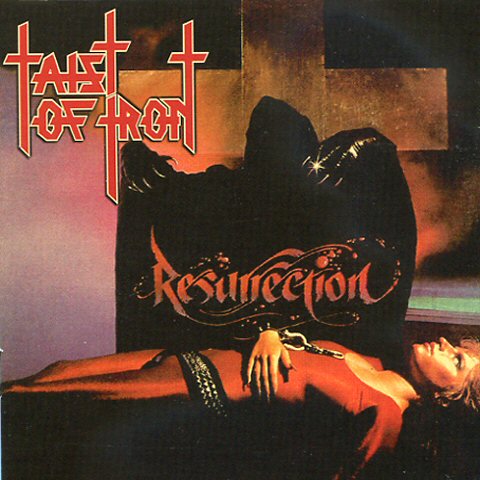 The band was formed by Guitarist Wylum Pearson (Bill). Bill had the vision, resources and funding to form Taist of Iron. Bill wrote most of the music and was the creative mind inspiring the band. Bill Wylum was lead singer for the band Allexis with a Bon Scott vocal style. He decided to put down the microphone and focus on playing guitar. Bill would hold battle of the bands at Midland, Washington where he searched for the best musicians. Lorraine Gill (singer) and Mark Glabe (bassist) were recruited from the local band Ruzscullen. Jeff Massey (drummer) had played with Bill previously and Mark Bakke (guitarist) was later recruited to the band through a series of auditions held for local guitar players. In 1983 Taist of Iron would headline at the Battle of the Bands at Midland Hall located in Midland, Washington near Tacoma. Most of the songs for the first album were created while rehearsing and performing there. The only album ‘Resurrection’ was recorded and released in 1984 and it was distributed around the Seattle and Tacoma area for sale. After the recording Mark Bakke left and the band went on as a four piece. Taist of Iron headed to Los Angeles, California in 1984 to show their album around to record labels and perform at Hollywood clubs like The Whiskey a Go Go, and Trubador. Bands like the Red Hot Chili Peppers, Guns and Roses, and Dokken were launching their careers playing the same circuit. Taist of Irons had a great live show with a grim reaper on stage opening the show while Lorraine was lowered from the ceiling to the stage. Two lighted 10 foot white crosses outlined a brick back drop with a brick archway leading Jeff on drums and there were also two Marshall stacks on each side of the stage. All this was portable and the band needed a road crew of 5 people to get it up before each show. However just before a scheduled show at the Trubador the band decided to call it a day. The year was 1986 and the band was 90% complete on a second album, living out of an 18 foot box van, surviving off sales of the first album to local fans. The second album was never recorded. Lorraine had an incredible voice, classically trained; she had the looks and spirit of a true artist. Her strong Janis Joplin vocal style soared perfectly over the heaviest metal sound the band could dish out. The member of Taist of Iron was much into heavy metal and shared the same passion as their fans and all they wanted to do was playing live in front of their fans. If youre into 80s heavy metal with a female vocalist then check this cd out as you might not be able to afford the original vinyl version