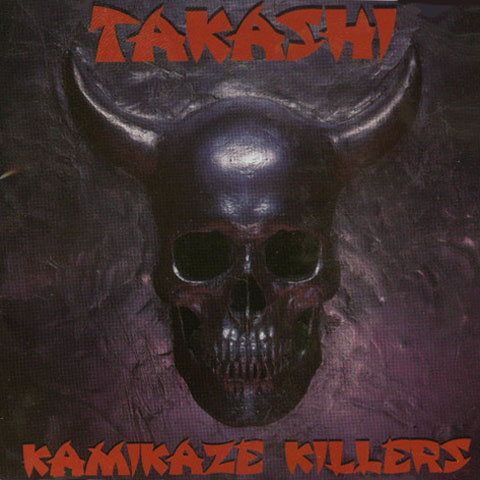 Despite the exotic moniker, Takashi were not the missing link between the Far East monsterglam of EZO and the flashy Japanese thunderrock of Loudness. In fact, they weren’t even Asian. They were simply five young white guys in a neo-thrash metal band from Long Island desperate for a cool, three syllable name. Their sole stand-alone contribution to the metal world was a 4 song EP called ‘Kamikaze Killers’ filled with 5 minute shred orgies, chugging, Maiden-esque rhythms, and a fair amount of caterwauling. It was unclear as whether Takashi were aiming for arena glam (see the plodding cock-rock of Playboy Girls) or horse galloping NWOBHM (see…well, the other 3 songs), but it was clear they were after something. From the sound of things, that ‘something’ was just out of their grasp, but hey, effort counts in metal, dude. And anyway, the cover, which featured a grinning silver demon skull busting through a steel wall, was utterly bitchin’, certainly one of the more memorable images of the flash metal era. AND they were on the legendary Mongol Horde, the sadly short-lived NYC based label that also boasted Thor, Virgin Steele, and Frank Starr’s pre-Four Horsemen band, Alien, in it’s ranks. Oh, and we can’t forget their inclusion on the legendary compilation New York Metal 84. You see, despite the meandering nature of their rumble-tumble trash metal, Takashi was There, in thick of it all, balls-deep in Priest riffs and stripy spandex, ready to take the world by storm. Just take one fuckin’ look at ‘Kamikaze Killers’, and it tells you all you will ever need to know about heavy metal in the 1980’s. Love it or loathe it, that the way it was in a time when Twisted Sister was bigger than Jesus. This cd includes the complete Kamikaze Killers EP, the two tracks from Metal Over America as well as an unreleased 1984 demo track and a live track.