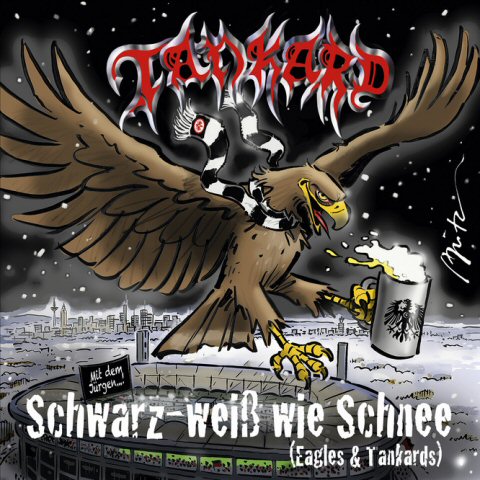 Tankard released the new version of their previously sold out EP Schwarz-weiß wie Schnee in September of 2017. ‘Schwarz-weiß wie Schnee’ is the anthem of the German football club Eintracht Frankfurt and has been played in the stadium for ten years before every home game. The song has now been completely re-recorded by the band. The thrashers were supported by Henni Nachtsheim (Badesalz), Ande Werner (Mundstuhl) and Roy Hammer (Roy Hammer & Die Pralinées), who can be heard in the backing choir. The artwork was designed by cult comic artist Michael Apitz, whose comics have been published for years in the stadium newspaper of Eintracht Frankfurt. Three months ago, Tankard played the song in front of over 30.000 enthusiastic Frankfurt supporters, a short time before the kick-off of the German cup final between Eintracht Frankfurt and Borussia Dortmund at Berlin’s Olympic Stadium. Mastermind Gerre states: “What an unforgettable event! We wanted those three and a half minutes to last forever! Simply amazing and incredible! This was once again one for the books… We tried with both clip and cd, to truly capture a part of these epic moments and we hope that not only football fans from Frankfurt enjoy them”