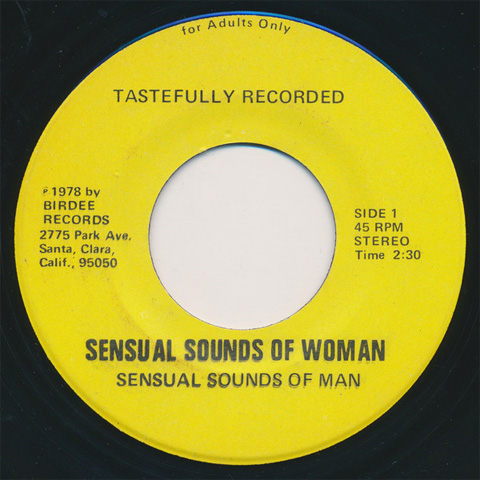 Reduced price due to some crunching sound. Probably received because it was released without picture sleeve

Every now and then you come across some really strange vinyls and thats the beauty and charm with collection records. This recording is one of those strange releases. It was released in Usa back in 1978 aiming for adults only. Side A features sensual sounds of a womean while side B features the same from a man. Both sides of the label informs us that it was tastefully reocorded but thats all, no cover artwork and no information about this man or this woman or where it was released. Maybe released in some sort of adult magazine in 1978 or sold at sex shops. I have no idea. Both sides have a playing time of 2:30 minutes. So I guess they must have had a hard time to find a willing man and a willing woman that both were able to reach their orgasm on the exact second. Good work