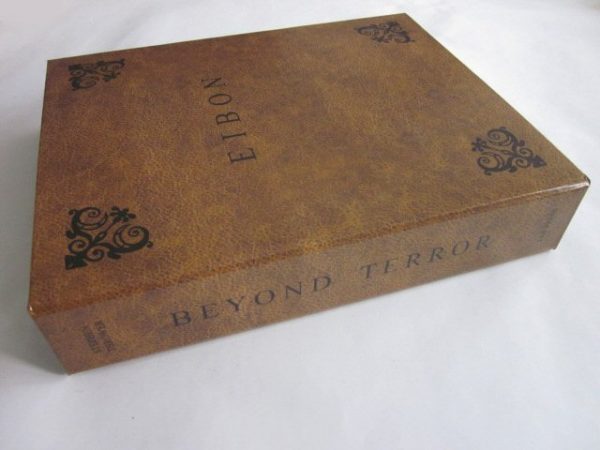 Terror Beyond The Movies Of Lucio Fulci Book

This is the ultra rare die-hard expanded edition. This 2017 updated version of the original 1999 book was only available through an indiegogo campaign. This massive 442 page book comes in a beautiful thick Einbon cover with a dvd featuring Lucio Fulci trailers and commentary, a 7 door hotel Do not entry door sign, an Eibon pin and a set of postcards. The book is also signed by the author

The most visually spectacular, graphically arresting fantasy film book yet published in English. Beyond Terror belongs in the library of every self-respecting shock connoisseur. –Fangoria magazine

This exhaustive, beautifully designed and substantial book is liable to stand as the last word on Lucio Fulci. After the revolution, every director of interest will rate a book as lovingly-rendered and definitive as this. –EMPIRE magazine

I honestly can’t think of a more beautifully produced or lavishly illustrated book devoted to genre films. Beyond Terror, devoted to films of a frequently nauseating level of violence, is itself an object of great taste and beauty. –Video Watchdog magazine

Author Stephen Thrower is a highly respected expert on Italian horror cinema. Beyond Terror was his first book for FAB Press. He also wrote the world-renowned cult movie bible, Nightmare USA: The Untold Story of the Exploitation Independents. Beyond Terror: The Films of Lucio Fulci is an astonishing and exhaustive examination of the life and career of the controversial Italian filmmaker who died of diabetes shock more than twenty years ago at the age of 68. Responsible for such gore classics as A Lizard in a Woman’s Skin (1971), Don’t Torture a Duckling (1972), Zombie Flesh Eaters (1979), City of the Living Dead (1981), The Beyond (1981), The House by the Cemetery (1981), The New York Ripper (1982) and A Cat in the Brain (1990), Fulci’s cinema is equally revered and despised for its excessive violence, raw intensity and – dare I say it – visual poetry. Stephen Thrower’s expansive book will I’m sure prove to be the definitive tome on The Latin Godfather of Gore and his many works. It explores all those aforementioned films as well as Fulci’s diverse directorial attempts at comedies, westerns, musicals and historical sword and sandal pictures. Handsomely illustrated with countless photographs and posters, this is an epic and essential volume. Despite being dismissed by critics as crass and confusing exploitation, Thrower and his publisher give Fulci’s filmography the kind of lavish treatment that is mostly afforded that of his more illustrious countrymen Fellini, Antonioni, Visconti, and even fellow horror master Dario Argento.