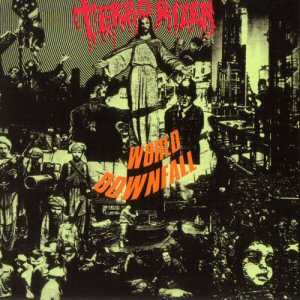 One of the landmark albums of the late-’80s grindcore uprising, World Downfall is nonetheless one of the least known, because the band only existed long enough to record this one Earache release. In fact, Terrorizer had already parted ways by the time of World Downfall’s 1989 recording and release. The Los Angeles-based trio — vocalist Oscar Garcia, guitarist Jesse Pintado, and drummer Pete Sandoval — existed for only a short period of time, roughly from 1987 to 1988, and though they played some local shows, they were most successful on the tape-trading network so integral to the underground metal scene of the time. Via this tape-trading network, Pintado came into contact with fellow guitarist Mitch Harris, who passed along the Terrorizer demo tape to Earache Records. The British label, which was ground zero for the grindcore movement, wanted to usher Terrorizer into a studio to record an album. Meanwhile, Sandoval had been invited to join the Florida death metal band Morbid Angel, which had been around for several years and had a strong underground following. Sandoval accepted the invitation and joined Morbid Angel in Tampa, where the band entered Morrisound Studios to record Altars of Madness, released by Earache in May 1989. Garcia and Pintado in turn joined their relocated bandmate in Florida, and the reconfigured Terrorizer lineup — which now included Morbid Angel bassist David Vincent, who offered to fill in the bass duties — rehearsed for a couple days before entering Morrisound Studios. It took producer Scott Burns two days to record and mix the tracks of World Downfall, which Earache proceeded to release in September 1989. The album is a 16-track, 45-minute onslaught of prototypical grindcore à la Scum: the free-form songs, which range from about 1:30 to 3:30 each, are filled with blastbeats, growling, and solo-free riffing. Highlights include “After World Obliteration,” the insane opener and longest song on the entire album, clocking in at 3:29; “Fear of Napalm”; “Corporation Pull-In”; and “Dead Shall Rise.” Shortly after the release of World Downfall, Pintado was invited to join the ranks of the mighty Napalm Death, whose guitar slot had been vacated by the departure of Bill Steer, who left to focus his efforts exclusively on his other band, Carcass. Pintado joined Napalm Death in time to re-enter Morrisound once again, this time to record Harmony Corruption (1990), while Sandoval went on to enjoy a long-lasting career with Morbid Angel. Garcia would later sing in the revived lineup of Nausea. So while Terrorizer was never well known, since the band barely existed, let alone toured or promoted itself, World Downfall has grown in stature over time and is regularly cited as a grindcore classic.