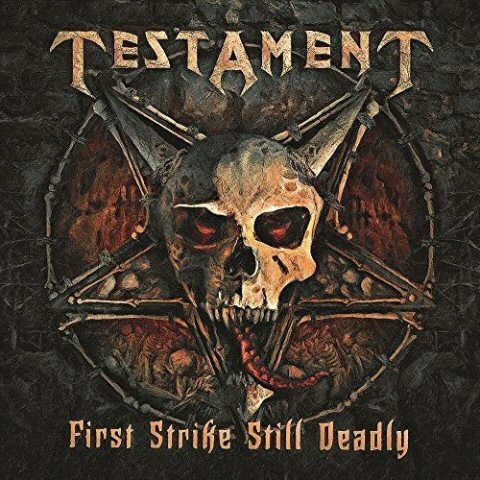 While revisiting the band’s first two albums, Testament, rather than remastering or reissuing, the classic pairing of Chuck Billy, Alex Skolnick, Eric Peterson along with metal legends Steve DiGiorgio and John Tempesta re-recorded what the band calls ‘their own greatest hits’ collection from the era. With updated production values, Testament staples like “Into The Pit,” “Over The Wall,” the album’s pseudo title track, First Strike Still Deadly both offers longtime fans a welcome addition to the catalog and newcomers a fresh introduction to the classic sound of thrash legends…albeit a bit updated with a heavier sound, slicker production and crisper packaging. Also, making an appearance on First Strike Still Deadly are two tracks featuring original vocalist – in the days when Testament was known as Legacy – Steve Souza (Exodus, Dublin Death Patrol) on “Alone In The Dark” and “Reign of Terror,” as well as artwork with increased imagery, as was intended to be used on the initial release of First Strike Still Deadly. While others from the mid- to late-80s thrash scene may have compromised their sound, integrity, or both as years passed by, Testament can be proud to wave the flag for an uncompromising honesty over the years in keeping true to the cause. Only getting heavier, faster and more brutal as time passes – the exact things that make First Strike Still Deadly an essential listen for seasoned metalheads and the freshly initiated alike – Testament has solidified their place in metal history as one of the legends, last long beyond formation and still remaining fresh and engaging 20-some years after forming in the bustling Bay Area. This 2008 re-issue of the album features the artwork that were only previously released in Japan

Track Listing
1. First Strike Is Deadly
2. Into The Pit
3. Trial By Fire
4. Disciples Of The Watch
5. The Preacher
6. Burnt Offerings
7. Over The Wall
8. The New Order
9. The Haunting

Vinyl single:
1. Alone In The Dark
2. Reign Of Terror