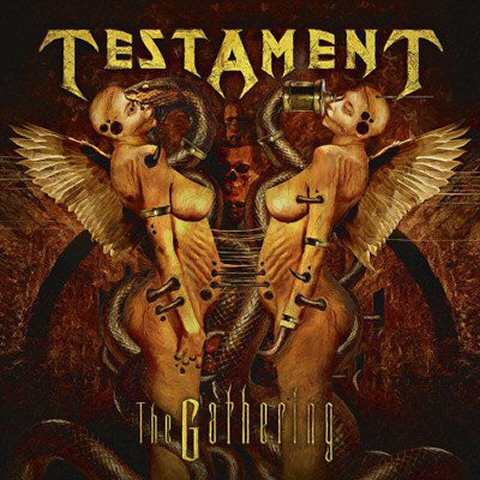 Now here is an aptly named title for the veteran thrash band, as this is truly the definitive “gathering” of musicians for Testament’s lineup. Joining the ranks of vocalist Chuck Billy and guitarist Eric Peterson is guitarist aficionado James Murphy (Death, Cancer, Obituary), bassist Steve DiGiorgio (Death and Sadus), and the human drumming machine himself, Dave Lombardo (Slayer and Fantomas). Testament, for the first time in many a full moon, is a complete, well-oiled musical machine. Sounding tighter then the previous four releases combined, Testament has used Demonic as the foundation from which they will once again build their metal legacy. The riffs are faster, heavier, and tighter, while the drumming is simple, but at the same time extraordinary (would you expect anything less from Lombardo?). Billy is one of thrash metal’s most gifted vocalists. Continuing to expand upon his over the top performance from the last album, Billy demonstrates an aggressive versatility that is unheard of in this genre, as his voice fluctuates from angry to more angry to downright snarling. Demonic suffered because it lacked vision, however, The Gathering is pure focused aggression, which is why it is such a monumental release for Testament. Songs like “Eyes of Wrath,” “True Believer,” and “Careful What You Wish For” demonstrate a catchy, uncanny songwriting ability previously unseen in this band. While “Legions of the Dead” is bar none the heaviest song Testament has ever written. Nevertheless, it is “Riding the Snake” that takes the cake on this album. Here the entire band pulls out their finest arsenal. Lombardo pounds away at his kit with equal precision and intensity, while Murphy and Peterson’s guitar interplay is playful and masterful. The real gem is DiGiorgio’s four-stringed feats, which consist of a Tony Choy-esque solo that is nothing short of extraordinary. Testament will be unconquerable if they can maintain this lineup, but for the time being, The Gathering serves to quench anyone’s parched metal thirst. Maybe you’ll find it equally refreshing. 2009 re-issue on double vinyl with gatefold cover and one bonus track