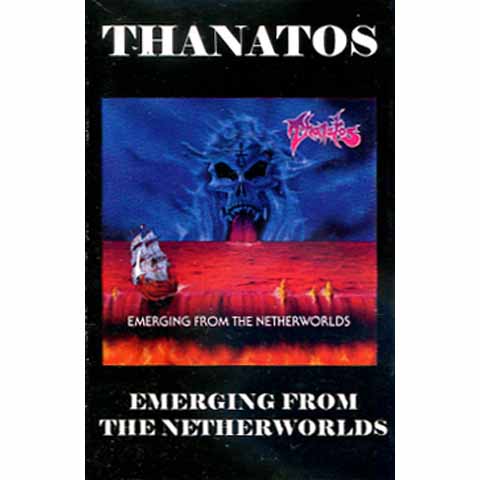 Thanatos –Emerging From The Netherworlds MC

In 1984, Thanatos became Holland’s first death/thrash metal band. Although they did not release an album until 1990, they spent the years in-between playing shows with the likes of Napalm Death, Kreator, Sepultura, Bolt Thrower, Autopsy, Death Angel, and Messiah. In 1989, they signed a deal with Shark Records and released ‘Emerging From The Netherworlds’. When this album was recorded Thanatos could easily have been mistaken for an ordinary thrash metal band because this is an album that Netherworlds gives the listener a good run for the money as far as speed and intensity are considered. The most notable feature must be the vocals – while the rough barks and semi-growls are rather typical for the time, there is also a unique kind of hollow and hoarse howling featured on some tracks which tend to sound really strange when heard for the first time. But it is the overall picture that matters, and most of the time Thanatos pass the tests with few remarks. Helped by some blazing fast riff attacks like Outward Of The Inward and generally a good atmosphere, this album plays in a solid though somewhat indistinctive style. You can’t really go too wrong with that kind of thing. The band would get deeper into death metal on their coming album.