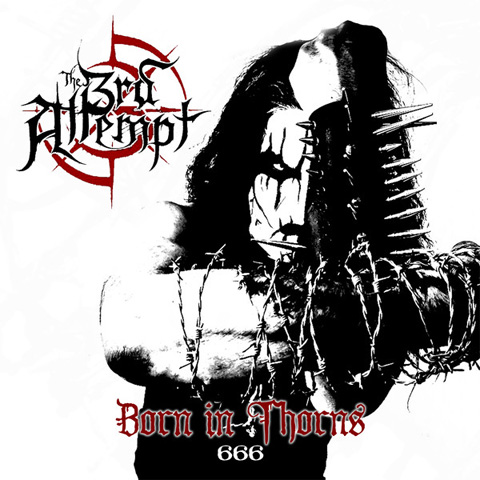 The shortest definition of The 3rd Attempt? Well, at first glance one might say that it is Carpathian Forest less the faeces of Nattefrost. The music of The 3rd Attempt is more or less identical with that of the former band of Tchort and Blood Pervertor. The production equals that of the last albums of Carpathian Forest and the punk and thrash influenced aura of the songs also pays tribute to Nattefrost’s sick horde. Nevertheless, The 3rd Attempt has also some elements in their portfolio that have never been heard in the forests of the Carpathians. For example, whenever I hear the sprawling leads of We Defy, I get an immense feeling of wanderlust, because the guitar sounds seem to be an invitation to explore the vastness of the Norwegian landscapes. Admittedly, the lyrics bear no direct relationship to Norway, but this does not affect the mood of the song. (To ignore the lyrical content deliberately is the privilege of the non-native speakers.) The sinister The Frostbitten Woodlands of Norway from Carpathian Forest also matches the atmosphere of this country, but The 3rd Attempt offer a more natural approach. Apart from this, both tracks are brilliant and We Defy belongs to the best pieces of the debut which lies here on my imaginary dissecting table. Moreover, it is to the credit of The 3rd Attempt, that We Defy does not follow the same line as, for instance, The Art of Domination. This song constitutes another highlight, but it is much more venomous. Lead vocalist Odemark sounds like an utterly malignant snake and the elastic riffing seems to underline the lithesome movements of this animal. By the way, Odemark defines the mood of many songs. The punk feeling of the opener is mainly based on his snotty performance. Despite the aforementioned punk and thrash ingredients, there is a lot of black metal in this debut. Sons of Winter can be mentioned in this respect. It starts slightly restrained, but galloping parts accelerate the tempo. The lyrics refer to the homeland of the group and make the black metal feeling complete. Incidentally, Born in Thorns can luckily rely on its state-of-the-art production which is formed by transparency, pressure and heaviness. A minimum of filth is also included. With regard to this technical implementation, a slow-moving song like the title track delivers its full potential. Flattening riffs and a background choir of tortured souls intertwine in order to reveal the maximum uneasiness. Yet it has to be noted that The 3rd Attempt do not feel a deep passion for slow rhythms. The average velocity is high and that’s how it should be. I do not know whether the band’s name indicates the forthcoming third wave of black metal, but I would have no objections. Norway has shown that it is able to unleash an ice-cold storm of churning black metal. Okay, The 3rd Attempt do not really offer a high degree of innovation. But a third wave that simply reanimates the vehemence of the beginning of the second wave would already be a good thing.