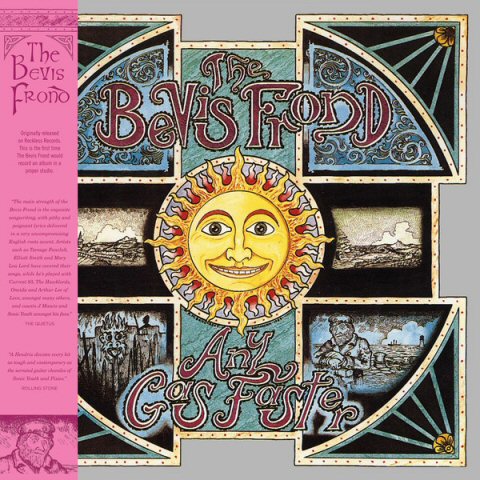 For all the isolated moments of brilliance on the Bevis Frond’s first three albums (not counting the vinyl-only experiment Acid Jam and the compilations Bevis Through the Looking Glass and The Auntie Winnie Album), it was not until 1990’s Any Gas Faster that Nick Saloman came up with a record that was truly strong from start to finish. It’s probably not coincidental that Any Gas Faster was also the first album Saloman recorded in a proper studio instead of on his bedroom four-track; perhaps having to keep one eye on the studio clock caused Saloman to approach the task of recording with a somewhat more determined air. Because that’s really the difference: the songs on Any Gas Faster just sound that little bit more purposeful, even acoustic interludes like “These Dark Days.” As a result, Any Gas Faster rocks harder than the previous albums without the sludge that occasionally bogs those records down. Martin Crowley’s fleet drumwork undoubtedly helps an awful lot here; with Saloman on drums, a song like “Then You Wanted Me” would lumber, but here, it’s almost punky in its hard-rocking intensity. And that one’s got nothing on the breakneck “Olde Worlde,” one of the most manic things Saloman’s ever come up with, with a closing dual-guitar battle like Television might sound after Verlaine and Lloyd had slammed a dozen espressos each. For traditionalists, there are also a few of Saloman’s trademark melodic rockers, with the delicately sorrowful “This Corner of England” and the anthemic “Lord Plentiful Reflects” among the highlights in the more typically Bevis-like vein. The skittish should know that no songs here break the six-minute barrier, much less creep into the 15-plus-minute range.