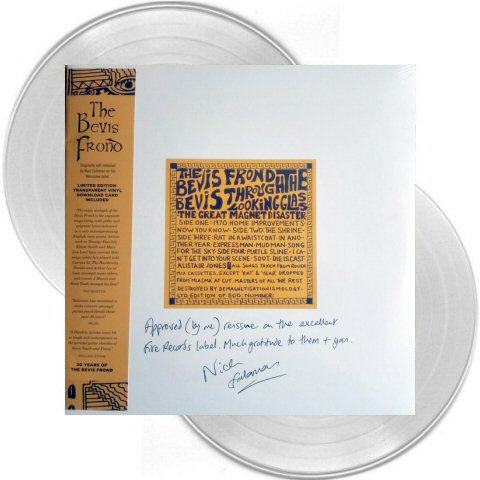 The Bevis Frond ‎–Bevis Through The Looking Glass dlp [clear]

Although the Bevis Frond only appeared on disc with 1987’s Miasma, Nick Saloman had in fact been a struggling musician for a good two decades before that breakthrough. (Indeed, the final track here, the paisley pop “Alistair Jones,” was recorded in 1967, when Saloman was all of 14 years old.) Originally released in a signed limited-edition record of 500 copies, then reissued as a double-LP set, Bevis Through The Looking Glass is a strictly historical collection of tracks that are primarily for the complete Bevis Frond devotee. Surely the average listener will find the 14-minute noodlefest “1970 Home Improvements” a tiresome slog, much less the side-long murk of “The Shrine.” The more concise tracks on disc two are much better, with “Rat In A Waistcoat” being among Saloman’s most biting early pop songs. Still, even this material is distinctly second class; Bevis Through the Looking Glass is completely unessential for all but the most die-hard Bevis Frond fans, but those diehards will find much to like, if not love.