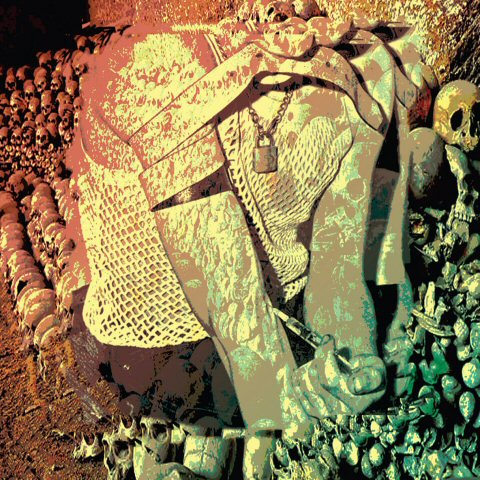 Black Scorpio Underground is the California based noise project of Joe Truck. Truck was a key player in the 1980s New York Goth scene with the band Scarecrow, he is now based in California. He has other many bands including the punk hardcore act Skull And Bullets, Aggrastat and now his main focus is a more No Wave/Experimental project called Puss. He has previously been in many bands such as Brain Eaters, Chop Shop, Hellvis, Confederacy of Horsepower, Mechanique, and Heatgun. Truck runs several record labels including Black Scorpio Records who released the recent Dark New York compilation which compiles key Goth bands in New York in the 1980s, and he is also an established Tattoo Artist in California. As a noise project Black Scorpio Underground has been prolifically releasing material since 2006, there have also been split releases with many projects including Aural Resuscitation, Haters, and Werewolf Jerusalem. The split 12” with Werewolf Jerusalem opens with Black Scorpio Underground’s Alone In The Orchard Of Souls. This simmers away in an ominous manner as conversations and speeches sound off in the distance, it abuses silence in the same way as Marco Corbelli’s Atrax Morgue could. Slight blasts of static and further noises that are used to build things considerably only for them to repeatedly fall in and out of ambient murk again. Each time the track rises again it is with an increased sense of intensity and urgency. Alone In The Orchard of Souls is akin to being upset and lost in hell. Werewolf Jerusalem is one of Richard Ramirez’s many projects, and it has been prolifically releasing since 2001. The lengthy Further Suspects In Rail Killings simmers nastily in parallel to the Black Scorpio Underground track on the other side. Resonating loops of static noise phase through each other continuously whilst background drones are ever present. Metallic scraping coupled with explosions of static crackle build and to shift Further Suspects In Rail Killings through a long series of noise phases.