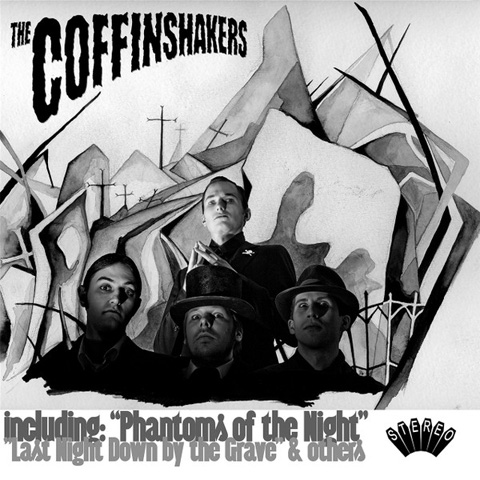 What if Johnny Cash had been more interested in vampires, werewolves, and the German expressionistic cinema than in walking the line? Meet the Coffinshakers. You know what to expect from gazing at the cover, inspired as it is by early German expressionist cinema in general and the “Cabinet of Dr. Caligari” in particular. But what truly makes this album crawl out of the grave when its neighbours are left to rot is that the Coffinshakers not only have the subject matter of Roky Erickson, they also have the conviction of Johnny Cash. The merger of classic country and western tradition with the offbeat subject matter, yet minus the usual ironic wink, is delivered effortlessly. The band is flawless within its limited range, and singer Rob Coffinshaker delivers the vocals with a gusto worthy of Christopher Lee. The clear production, which adds a few dark and stormy night effects amid the background wails of Rebecca, is simply classic and improves on the more rambunctious early releases by the band. Song titles like ‘Curse Of The Mummy’s Tomb’ reference the revered Hammer horror films, and ‘Last Night Down By The Grave’ could have been dragged screaming out of the late period Johnny Cash songbook. ‘King Of The Night-Time’ is a Sun Records period rockabilly romp, complete with the mid-tempo denouement at the tail end. Concrete Blonde’s ‘Ghost Of A Texas Ladies’ Man’ is probably as close as you can get to the sound of a Coffinshakers song without actually listening to the album, and while the band is obviously having fun and expects the listener to do the same, they manage the whole album with a straight face. In fact the only real complaint I have with the record is that it IS so derivative and closely observant of its roots. Still, perversely enough, it wouldn’t work nearly as well if this were not the case. Lyrically it’s not brilliant, but it brilliantly captures the excitement of an early ’60s horror cinema’s familiar hammy acting and less than subtle dialogue. This is a peculiar feat, but the record actually benefits from its shortcomings, and the result is a classic Halloween party record in the vein of Roky Erickson’s Evil One or The Cramps’ Songs the Lord Taught Us. It’s not a groundbreaking record like either of these — it lacks the off-kilter lyricism of Erickson and the cool swagger of the Cramps — but it’s equally enjoyable in its own offbeat way.

Track listing:
1. Phantoms Of The Night
2. Return Of The Vampire
3. Last Night Down By The Grave
4. Necromancy
5. Evil
6. Curse Of The Mummys Tomb
7. Walpurgis Night
8. Voodoo Woman
9. From Here To Hell
10. King Of The Night-Time
11. The Coffinshakers Theme
12. Transylvania