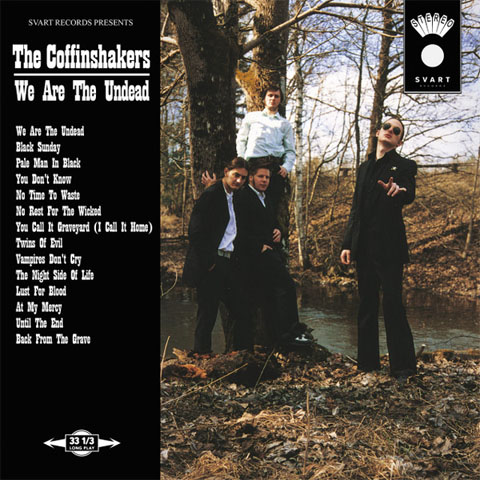 What if Johnny Cash had been more interested in vampires, werewolves, and the German expressionistic cinema than in walking the line? Meet the Coffinshakers. Formed in 1995 in Karlstad, Sweden, by Rob Coffinshaker (aka Rob Stringburner aka Robert Fjällsby), the Coffinshakers eked out an existence from small printings of 7″ red vinyl singles and occasional gigs to a mostly uninterested audience. Their first single, “Dracula Has Risen from the Grave,” inspired by the classic Hammer horror film, appeared in 1996. The band’s direction of merging traditional country sounds of Johnny Cash and Waylon Jennings to subject matter closer to Roky Erickson & the Aliens may have sounded loony, but Rob Coffinshaker’s voice echoed the same gloomy low registers as his influences. The traditionally performed songs were catchy and entertaining, the Ennio Morricone and Ventures influences cleverly integrated, and the lyrics were…full-bodied. Their first full-length record appeared in 1999. We Are the Undead continued in the same vein as the early singles, and they had a small but rabid following — mostly in the neighbouring Finland. Over the years this debut album has become a highly sought and pricy album when the band have become legendary not only in Finland but also in their own country.