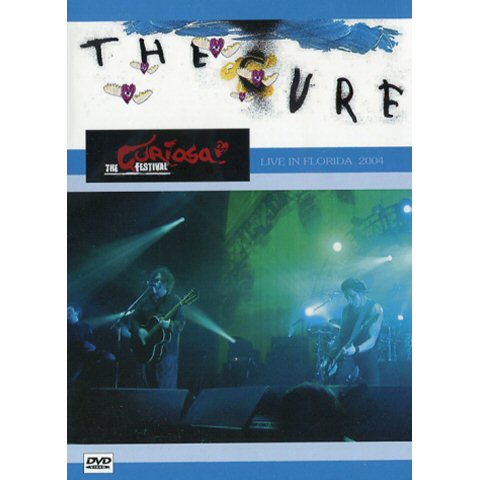 If a band sticks around long enough, it can headline a festival of its disciples. That’s what the Cure is doing with its Curiosa Festival featuring bands that have been hand picked by Robert Smith himself. Over 25,000 Floridians braved the heat to see the kick off of the Curiosa Festival 2004 in West Palm Beach on Saturday, July 24th, where this dvd was recorded. Music fans from all over the state gathered to hear The Cure perform a set that included such classics as Fascination Street, Just Like Heaven, In Between Days and new songs such as The End Of The World, the current single off their new self-titled set which was released on I Am/Geffen Records on June 29th and debuted at # 7 on the Billboard Top 200 chart. The Cure showed us in the late 70s that a man could be vulnerable and emotional, but giving those feelings a new kind of voice: Robert Smith’s quivering, almost androgynous yelp, desperately blurting out its need. Two decades later, the Cure would turn out to be a cornerstone of Emo, the collegiate rock in which hypersensitive guys tell all. And there were alot of Emo kids in the audience this night. The Cure performed songs that were both personal and about political alienation. Mr. Smith writes songs with lyrics that might look mawkish on the page, often bemoaning the loves that got away. He promises endless, boundless love that just won’t stop after a breakup; it gnaws at him, as the music piles up layer upon layer, taking its time. His songs have become doomed-romantic anthems for a generation of high-school and college students. Some songs are neat matrixes of short pop hooks; in others, a bass line tolls while guitars create fogbanks of distortion. And every so often, a lyric glimpses the outside world; a new one, ”Us or Them,” lashed out at war and bigotry, insisting, ”There is no terror in my heart.” Onstage, with lights that gave Mr. Smith a saintly aura, the Cure’s music reached a genuine grandeur, turning romantic torment into its own lush sanctuary. The set list was a binge of aural elegance spanning multiple albums, from Disintegration’s Fascination Street, Love Song and Pictures of You to songs from Pornography, Wish, and more. Few, if any, modern songwriters can dissect the intricacies of love, the infinite variations of anticipation, connection, and separation, the highs and the lows, the way Smith can. It can be as comfortable as the warm, hearthside “Lovesong” or as infuriating as “Disintegration”. The other four Cures – all clad in black, bassist Simon Gallup frequently bouncing around like he was in the Clash – matched Smith’s lyrical intensity measure for measure. The Cure often sounds like the end of the world, a topic Smith is evidently fond of, as it appeared in both lovely Plainsong and new, appealingly chipper “The End of the World.” For Smith, the absence of love is the end of the world – or worse.