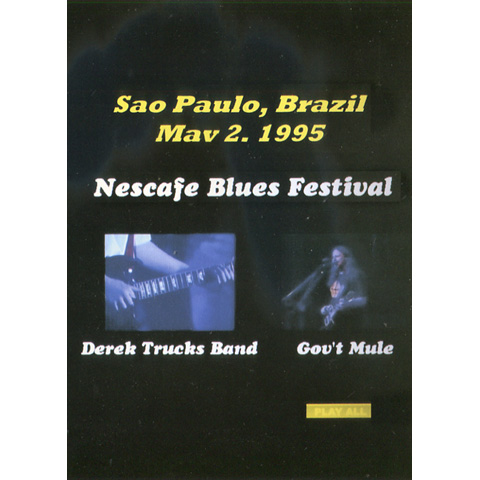 Two great concerts, especially if youre into The Allman Brothers Band, from the Brazilian blues festival Nescafe Blues Festival that takes place in Sao Paulo. First out is the guitarist and songwriter Derek Trucks, who has been described as the greatest slide guitar player that’s ever lived, and his Grammy Award-winning The Derek Trucks Band. Dereks musical style encompasses several genres and he has twice appeared on Rolling Stone’s list of 100 Greatest Guitarists of All Time. He is the nephew of Butch Trucks, drummer for the Allman Brothers, and Derek himself became an official member of The Allman Brothers Band in 1999. The recording on here is from the second edition of the festival, where Derek performed on the 27th of May 1995. This is an early recording with Derek as he was only 15 years old at the time.

Out next comes a show with the American Southern rock jam act Gov’t Mule from the third year where Gov’t Mule performed on the 30th of May 1996. Gov’t Mule were headlining that night and even if the musicians has been going for a long time and easily could put together a repertoire of their roots, Mule’s business is to walk on the frontier of rock and blues. But since the band is run by Allman Brothers Warren Hayne and Allen Woody its hard to avoid the obvious Allman Brothers Band affiliate label. The band makes the same kind of heavy and dirty sound as the power trios of the 70’s. It works in Usa but can rock the tables in Brazil as well. At least, Haynes has black American music in his vein and manages to pass the influence on to his hoarse voice. This night in Sao Paulo they performed their own songs as well as cover versions of Mr. Big from Free, Don’t Step On The Grass, Sam from Steppenwolf, Presence Of The Lord from Blind Faith and Just Got Paid from ZZTop, two of them are found on this dvd. In 1996 Haynes was elected for the second consecutive time as Best slide guitarist, by the renowned American Guitar Player, for his work at Gov’t Mule.