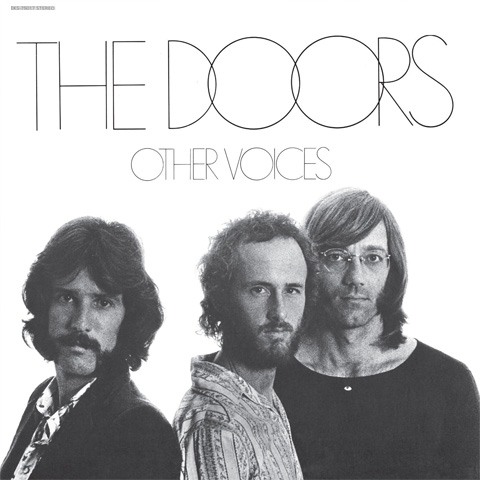 The Doors -Other Voices lp [usa]

Original 1971 US Pitman press with gatefold cover and printed innersleeve

To many enthusiasts, the loss of Jim Morrison (vocals/lyrics) likewise meant the passing of the Doors. Certainly the band’s focal point changed on the two long-players that the trio of John Densmore (drums/vocals), Ray Manzarek (keyboards/bass pedals/vocals), and Robbie Krieger (guitar/vocals) issued in the immediate post-Morrison era. As the “surviving” Doors had been working on ideas to present to Morrison — if and when he returned from a sabbatical in Paris, France — there is an organic flow that had spilled over from the L.A. Woman (1970) album. Another undeniable plus to Other Voices (1971) is that after being relegated as sidemen, each of the players is given an outlet for their songs and underutilized talents. Manzarek’s bluesy opener “In the Eye of the Sun” has hints of “Down So Long” and “The Changeling.” However, its true earmarks are the greasy slide guitar licks proffered by Krieger during the solo, and in response to Manzarek’s lead vocal. Speaking of the guitarist, he is credited with the bulk of the material, beginning with the whimsical ode to monogamy “Variety Is the Spice of Life.” Particularly suitable here is Krieger’s nod to the Lovin’ Spoonful’s “Did You Ever Have to Make Up Your Mind.” The ethereal Densmore/Krieger composition “Ships w/ Sails” adopts the languid vibe of “Riders on the Storm,” especially throughout the instrumental jam. Reaching back to the raw and ready sound of “Roadhouse Blues” is the semi-biographical and definitely metaphoric “Tightrope Ride” with direct references to the recently deceased Rolling Stones co-founder Brian Jones and seemingly implied about Morrison. The band charge forward in pure power trio mode with plenty of interaction between the primary participants — most notably Krieger’s fiery fretwork and Manzarek’s authoritative vocals. “Down on the Farm” is one of the less stylistically cohesive numbers, vacillating from the serene and slightly Polynesian section that breaks out into a rural hoedown before reverting back again. Yet the gorgeous melody and arrangement defy any of the other (slightly dated) incongruities. The upbeat “I’m Horny, I’m Stoned” is undoubtedly a reflection of both where Krieger — the song’s author — as well as the survivors of the emotionally frazzled ’60s collective heads were at. The mixing of ennui with an underlying paranoia provides a fascinating contrast. There is a soulful everyman quality to Manzarek’s embodiment of the “Wandering Musician” that reiterates his considerable range as a performer. While not an overt homage or tribute to Morrison, there are a few obvious parallels within “Hang on to Your Life.” The tune progresses through several distinct musical sections as the tempo incrementally accelerates to double time before concluding in an ultimate cacophony. No subtlety needed here. Although they’d never regain their former acclaim, the Doors would take this platter into the Top 40 and pull off a successful tour behind the project. The three-person line-up wasn’t done yet as Full Circle (1972) followed the next year, after which Densmore, Krieger, and Manzarek laid the Doors to rest.