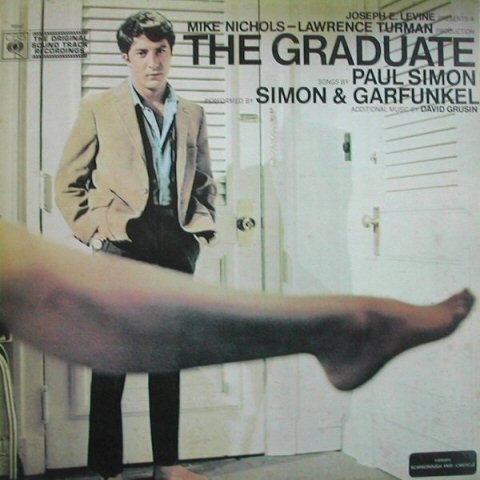 Cover and vinyl being vg+

The soundtrack to Mike Nichols’The Graduate remains a key musical document of the late ’60s, although truth be told, its impact was much less artistic than commercial (and, for that matter, more negative than positive). With the exception of its centrepiece track, the elegiac and oft-quoted “Mrs. Robinson” — which only appears here as a pair of fragments — the Simon & Garfunkel songs that comprise much of the record (a series of Dave Grusin instrumentals round it out) appeared on the duo’s two preceding albums; Nichols’ masterstroke was to transplant those songs into his film, where they not only meshed perfectly with the story’s themes of youthful rebellion and alienation (and the inner life of the central character, Dustin Hoffman’s Benjamin Braddock) but also heralded a new era in movie music centred around the appropriation of past pop hits, a marketing gimmick that grew exponentially in the years to follow. The Graduate soundtrack, then, merits the dubious honour of being the earliest and one of the most successful Hollywood repackaging of “found” pop songs, a formula essentially based around coercing fans to purchase soundtrack albums filled with material they already own in order to acquire the occasional new track or two. The album began its life because of Nichols’ enthusiasm for the duo’s music, and Columbia Records chief Clive Davis’ ability to persuade the pair of the importance of a soundtrack album. Davis turned the actual making of the album over to producer Teo Macero, who approached it with scepticism — Paul Simon and Mike Nichols had discovered that they really weren’t on the same page, with Nichols rejecting “Overs” and “Punky’s Dilemma,” songs that ended up as highlights of the Bookends album, issued two months after The Graduate soundtrack. Thus, there wasn’t enough Simon & Garfunkel material to fill even one LP side, and only about eight minutes of that were “new” recordings, and barely a quarter of that (the “Mrs. Robinson” fragments) new song material. And there also wasn’t enough of David Grusin’s instrumental music (none of which meshed with the duo’s work) for an album. Macero combined this material into a musically awkward album that somehow did its job — which, in Davis’ eyes, was to introduce Simon & Garfunkel’s music to the parents of their existing audience (topping the charts in the bargain, and turning Grusin’s “Sunporch Cha-Cha-Cha” into a favourite of easy listening stations). Fans of Simon & Garfunkel likely felt cheated by the presence of the “Mrs. Robinson” fragments, as well as repeats of the 1966-vintage “The Sound of Silence” and “April Come She Will,” and an edited extension of “Scarborough Fair/Canticle.” But there were two curiosities for the completist — a high-wattage, edited rendition of “The Big Bright Green Pleasure Machine” (in a style seemingly parodying the sound of Bob Dylan’s Highway 61 Revisited); and a gentle, subdued acoustic reprise of “The Sound of Silence,” which was possibly the best studio rendition the duo ever gave of the song.