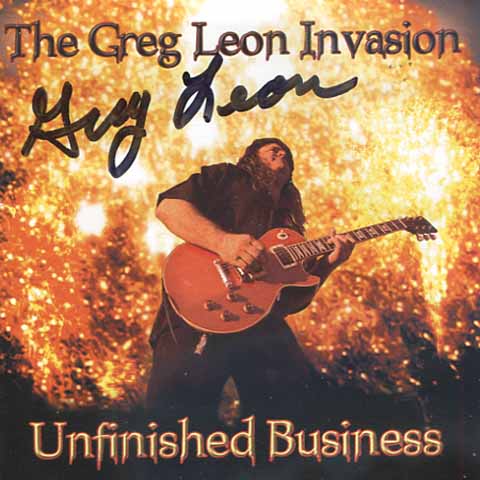 Signed on the front by Greg Leon with a black marker

What you should know and probably dont!
* Greg Leon was actually the very first guitarist in Dokken prior to George Lynch
* Greg Leon was in a band called Suite 19 with future Motley Crue drummer – Tommy Lee
* Greg Leon gave guitar lessons with Randy Rhoads at Randy’s mom’s guitar school
* Greg Leon replaced Randy Rhoads in Quiet Riot when Randy left to join Ozzy Osbourne’s band
* Greg Leon actually wrote the riff that became Ozzy Osbournes legendary tune Crazy Train. Randy borrowed it from Greg, Ozzy loved it, and then they wrote Crazy Train around it. The original Greg Leon version with this riff can be heard on this album.

Growing up, Greg Leon was inspired by the dawn of the 70’s Guitar-Heroes. He immersed himself in the 6-string prowess of Jimi Hendrix, Leslie West, Frank Marino, Robin Trower, Ronnie Montrose, Rick Derringer, Pat Travers, Rory Gallagher, Danny Johnson, Johnny Winter and Ritchie Blackmore. Raised in the Los Angeles suburb Glendale, Greg focused his love of guitar to develop and hone his own unique passionate approach to the instrument at a truly amazing time in the Hollywood music scene. As a teen, Greg teamed up with future Motley Crue drummer Tommy Lee in their band Suite 19. Back in the 80’s Greg was a wonder-kid guitar slinger on the Sunset Strip, and made his mark while rubbing elbows and trading licks with Eddie Van Halen and Randy Rhoads at the legendary Starwood club. Greg took over for Randy Rhoads when he left Quiet Riot to join Ozzy Osbourne. After a year with Quiet Riot, Greg became one of the founding members of Dokken. Greg toured Europe with the band and worked on a substantial amount of material for the first album. Shortly after returning from a European tour with Dokken, Greg turned his guitar position over to George Lynch and decided to strike out on his own to follow his destiny and musical vision in a power-trio format in tribute to his early guitar hero influences. Greg Leon is a true journeyman musician, producing several Independent albums before the term even existed, such as his debut cd titled Guitars, Cars, And A Woman followed by Unfinished Business in 2005, and Wishing Well in 2007. Greg Leon’s ability to maintain his musical vision for over three decades is testament to his conviction to make real rock music that touches people.