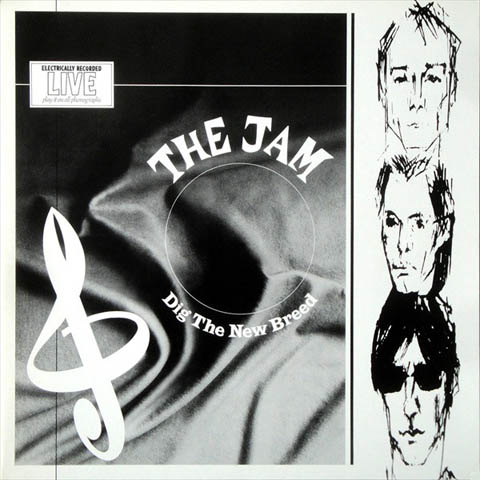 Reduced price due to vinyl being vg+

A last farewell gift from the band in the year Weller spectacularly announced his departure from it, Dig The New Breed is a sometimes rough around the edges live overview of the band’s work, from small club dates in 1979 to much larger venues in 1982. Recording quality throughout is quite excellent — it’s not specified whether the band always recorded its shows with such care and just had a mountain of tapes to work through, but the end results are quite enjoyable. It’s not a perfect album, admittedly, though that’s due in large part to the sheer number of memorable songs that don’t show up (something that Live Jam rectified 11 years later). That said, plenty of hands-down winners take a bow. Besides obvious highlights like “Start,” “Going Underground,” and a superb “That’s Entertainment,” noteworthy album cuts get well-deserved showcases. “To Be Someone” and its barbed portrait of fame and its pitfalls, the appropriately fiery “Set the House Ablaze,” and the tender yet tense “Ghosts,” in particular, sparkle. If there’s one thing clear about Dig the New Breed, though, it’s that the worshipful reputation the group still has as a live act almost without parallel was well founded. Weller’s sharp, barked passion shot through with yearning emotion is as strong here as on the Jam’s best studio work, and as a unit the three players just shone, tightly wound, explosive, giving the melodies the full-bodied roar they deserved. The inclusion of horn sections and other musicians later sometimes cause the core band to get a bit lost — when it’s just the three, they’re at their clear best.