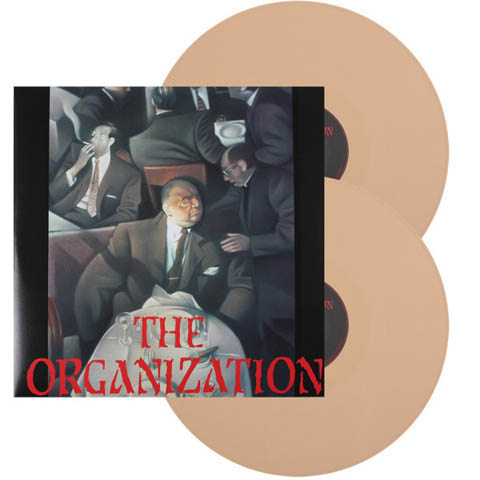 The Organization was a heavy metal group formed by the remaining four members of Bay Area thrash metal titans Death Angel — guitarist/vocalist Rob Cavestany, guitarist Gus Pepa, bassist Dennis Pepa, and drummer Andy Galeon — following the departure of Death Angel singer Mark Osegueda in 1991. Looking to survive the commercial death of thrash by pursuing a more traditional heavy metal/hard rock sound, The Organization, named after a song from Act III, issued two independent albums through Metal Blade: 1993s self-titled debut and 1995s imprudently named Savor The Flavor, before succumbing to listener indifference and splitting up the following year. Numerous other projects featuring all or some of the usual suspects named above (most notably the Swarm) would emerge in years to come, but 2001 actually saw the beginning of a full-fledged Death Angel reunion begin to take shape, finally resulting in 2004s The Art of Dying comeback. When The Organization released their self titled debut album in 1993 it surprised people…for reasons both good and bad. Abandoning the thrash metal that drove Death Angel to the top of the Bay Area metal underground, The Organization fits in with the growing hard rock/alternative metal scene that churned out bands like Faith No More and Janes Addiction. It may appear to be an odd stylistic decision, considering the pedigree of the members involved, but they do a convincing job making the music sound like something that could be played at college radio stations. Dropping the thrash doesnt mean the foursome tone it down for a wider audience or a chart-topping single. These songs are mainstream without catering to the MTV generation. Guitarists Rob Cavestany and Gus Pepa kill it on their instruments, with 80s-styled solos the main holdover from their past. Cavestany also provides lead vocals, which is the precursor to his vocal work on The Art Of Dying (side-note: listening to this album gives added perspective to how Death Angel could write a song like Word To The Wise). The band would get much more experimental in the alt rock spectrum on their second album Savor The Flavor, but on this record, prying outside of rock/metal comes from the bass-led funkdowns. Dennis Pepa goes all Flea on the bass on Brainstorm and Been Nice. Lift starts out innocently enough, but then comes the saxophone lead halfway through to jolt the song into a totally different area. Its not a long detour, though, and doesnt feel inappropriate. Act IIIIs Veil Of Deception showcased the bands prowess with acoustic guitars, and this album steps further into that influence. Wonder is a pristine ballad lacking in cheese, and seeping with self-discovery and a message of living one day at a time. The explosion of guitars near the end is a rousing finish that isnt matched by any other song on the album. The Past is the bands attempt at an opus, one that surges from a solemn acoustic melody to a boiling pace to a sharp guitar solo finale, all within five minutes. The Organization was not a bona fide hit with metal fans, and not what Death Angel fans were expecting, but it is a strong hard rock/metal album with funk/groove undertones. For keeping the spirit of Death Angel alive, abet in a more commercial nature, The Organization gets the nod for this weeks Retro recommendation.