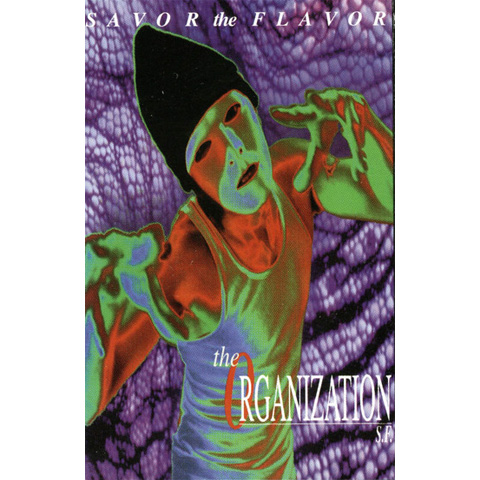 The Organization -Savor The Flavor MC

The Organization was a heavy metal group formed by the remaining four members of Bay Area thrash metal titans Death Angel — guitarist/vocalist Rob Cavestany, guitarist Gus Pepa, bassist Dennis Pepa, and drummer Andy Galeon — following the departure of Death Angel singer Mark Osegueda in 1991. Looking to survive the commercial death of thrash by pursuing a more traditional heavy metal/hard rock sound, The Organization, named after a song from Act III, issued two independent albums through Metal Blade: 1993s self-titled debut and 1995s imprudently named Savor The Flavor, before succumbing to listener indifference and splitting up the following year. Numerous other projects featuring all or some of the usual suspects named above (most notably the Swarm) would emerge in years to come, but 2001 actually saw the beginning of a full-fledged Death Angel reunion begin to take shape, finally resulting in 2004s The Art of Dying comeback. As i said earlier the musical similarities between Death Angel and The Organization are very small, so actually it’s not fair to compare both bands, just because four band members are the same, but something like that is just unavoidable. Their second album, Savor The Flavor, has some songs on the album that could have been big hits with the right promotion, I guess. Just listen to tracks like Begin A Life or The Chase, when it comes to melodies and catchy choruses, those songs fit in the alternative rock scene of that time perfectly. Even though the Organization has a more original and experimental approach. But there’s more than just that. The album starts out with the title track, which is a two and a half minute melodic rock song with a slightly punky approach, beautiful lyrics and ditto vocal work. This makes the track one of the best songs on the album. Probably closest to Heavy Metal is the following So Full Of Lies, with its pushing rhythms and typical use of chords. Nonetheless, the verses are very funky and that’s of course Dennis Pepa’s fault. A strong song, but even stronger is the next track; Doomsday Eve. This Andy Galeon-penned track has a very strong structure and the intro riff is just one of those enchanting riffs that only Andy Galeon and Rob Cavestany can write. The clean part in the middle comes as a surprise and the chorus is beautiful too. Somehow this song reminds me of Policy, one of the two best tracks on the self-titled debut by the band. Next up is A Way Today and that is where the album starts to take a more experimental hook. There’s a wonderful catchy chorus in here and a very strange structure as it starts out with a kind of a funky intro and then goes right into some experimental part. I think this song shows that the band is influenced by Steely Dan quite obviously. Another experimental one is the following Had A Long Today, which is one of my favourite tracks of the album. It starts out with just acoustic guitars and Rob Cavestany’s vocals and after the first chorus turns out to be a strange track with unusual bass parts and swinging rhythms. The atmosphere of this song is also just perfect. With The Chase, a more accessible part of the album starts. The Chase is a beautiful rock song with a ditto catchy chorus and nice vocal interaction. War 25 starts as a very minimalistic song with just one-chord-riffs on an electric guitar and Rob Cavestany’s vocals and just when you think the song has finished, there’s another part beginning with some melodies that keep ringing in your head all day long. What follows is the beautiful acoustic intro to Begin A Life, which somehow reminds me of bands like Deep Blue Something and those other temporary heroes of the time. Begin A Life is a song in that vein too, but actually a lot stronger. Another experimental part starts. The Drought is a neo-Punk like track, starting out with distorted vocals. I never see distorted vocals as a good idea, but the rest of the track is good though. Insomnia and Stupid Mood are both experimental rock songs with a funky hook, the latter one most likely having that because Dennis Pepa co-wrote it and his bass lines form a pretty important part of the song. Save the best for last…that is exactly a comment which fits in this album. The last track begins and By The Time is truly the most beautiful moment on the album. A beautiful clean guitar riff and beautiful emotional vocals by Rob Cavestany. A true tear jerker. When after the louder part of the song there is a wonderful bass solo in the intro, my heart is really taken. This is THE song of the album. Concluding, I can say that Savor The Flavor is the most experimental effort that any of the band members (and especially Andy and Rob) ever were a part of. Savor The Flavor is a little less consistent than the debut album but not by any means a worse album. If you’re not afraid of experiments, I think that checking this album out will be a great choice.