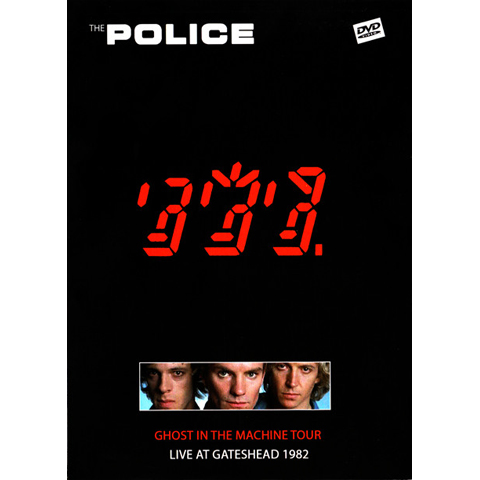 The Police ‎–Ghost In The Machine Tour dvd

The Rock On The Tyne festival returned for the second time at Gateshead Stadium in 1982. This took plae at the International Stadium on the 21st of July 1982 and it was headlined by The Police which were fronted by a local lad called Sting. The first festival, in 1981, saw the likes of Elvis Costello, Ian Dury, and local favourites Lindisfarne. Now we had Lords Of The New Church, The Gang Of Four, The Beat, U2 (on the cusp of greatness) and The Police. As for The Police the pop-punk trio were approaching the peak of their powers when tickets for the show went on sale – at a princely £8 each. This was a time before Sting’s much publicised flirtation with rain forest issues, before he left in exile for Tuscany, before tantric sex, and before he amassed his vaunted £185m fortune. Newspaper reports from the time usually referred to Sting – real name Gordon Sumner – as the “milkman’s son from Wallsend,” and indeed the Chronicle secured a short interview with the star’s father. For proud dad Ernie Sumner, who lived in Tynemouth, and ran a dairy business, this was only the second time he saw Sting and his group, The Police, in concert. There were also reports about other members of Sting’s family would be attending the show, including his two sisters and younger brother who was a partner in the family’s Wallsend-based Cleveland Dairy business. In the event, the show was something of a damp squib with disappointing ticket sales and gloomy North East weather hampering the event. The relatively low attendance was put down to the region’s young pop fans being hard-up at a time when unemployment was soaring, and the fact the Rolling Stones had played at St James’ Park only a fortnight earlier, overshadowing The Police. Gateshead Stadium, at the time, had earned a reputation as a major athletics venue, with sell-out meetings, thanks to the efforts of Brendan Foster. But when The Police took to the stage on July 31, 1982, there were just 12,000 to 15,000 fans in the arena when nearly twice as many had been expected. Nevertheless one reporter declared: “The sun, which can do so much to make an outdoor concert a success, hid behind the clouds, and the date wasn’t the hoped-for sell-out, but musically it was a triumph. The band was red hot on the night. They played against a background of a grey Gateshead skyline on a cool overcast evening, with the wind blowing their hair around, but there was nothing dull or drab about their music. It sparkled.” Sting himself started the show in a bad mood, swearing and announcing: “I hate Virgin Records. I hate the legal process. I hate the press.” But he mellowed, later announcing: “Seven years ago I left this town, and said I would make it. It’s nice to come back and make you part of that success.” And his milkman dad, Ernie, got a passing mention from the stage: “We used to get up at 4am when there was nobody else about. I used to imagine what it would be like if a bomb dropped on Newcastle.” With The Police supported by the up-and-coming U2, this was in retrospect one heck of a line-up for rock fans, and it’s a mystery why the Rock On The Tyne event wasn’t a sell-out. When they broke up just two years later, The Police had become the biggest band in the world, but they would never play in the region again – surprisingly giving it a wide berth when they reunited for a mammoth world tour in 2007. Gateshead Stadium would go on to host a series of successful high-profile concerts, with the likes of Bryan Adams, Bon Jovi, Dire Straights and Tina Turner rocking out over the next two decades. But surely, there would never be a better and bigger line-up at the venue than The Police and U2. There are also bonus material from Beat Club in Germany