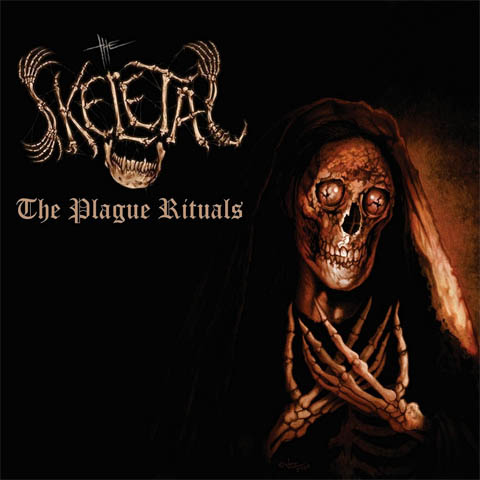 Floridian death metal has never really gone away and The Skeletal reminds us that the original sound built upon by the likes of Death, Massacre, Deicide and Obituary is not only still breathing but still emitting an ugly foggy mist over our playing field. The Plague Rituals reconnects the death underground with a myriad of familiar elements, but rather than roll your eyes at much of the same vocalist Kam Lee and company rip the doors off the old school with such chaotic and inflaming gore-laced death metal that you are torn asunder. Lee’s vocals are as vital and brutal as they ever were in Massacre, pulling even the most unimpressed metalhead into the sewer of bloody paintings from the warped and precise imagination of his personal mental dungeon. The man knows how to issue a statement, grand and usually terrifyingly grotesque with such brutal artistry put to verse. Kam Lee knows the deadly formula of how an old school death metal album should sound. The Plague Remains is neither technical nor brutal in the genre sense. Just simple, thrashy and at times even catchy death metal. The lack of polluted jargon is what propels The Plague Rituals well past its peers and redesigns the drawing board sheets in direct accordance to a past too easily liquefied and wiped clean with a dirty rag. There is no margin for question here, people – Kam Lee is still around and still angry, and if you’re lucky he may invite you into his macabre world of fantasy that only we chosen few can understand and enjoy.