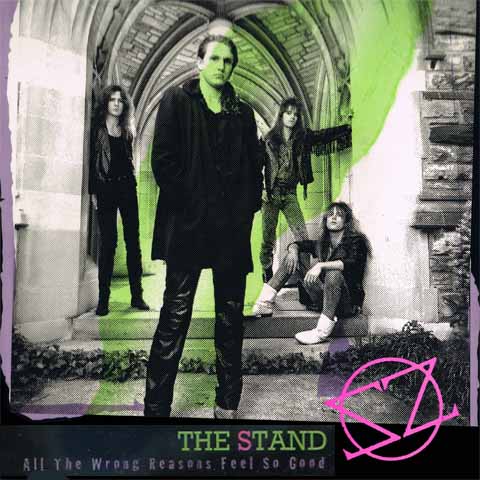 The Stand –All The Wrong Reasons Feel So Good cd

Every town across America in the 80’s and early 90’s had its own unique local hard rock/heavy metal scene, and Nashville was no exception. And during those years, there was one mainstay that ruled the Nashville Hard Rock Scene, regardless of the countless name changes, formations and deformations, and revolving doors. The core of that mainstay was the Simmonz brothers: Mike, Paul, and Jamie. Now to tell you the story of the Simmonz Brothers would be a book in and of itself, so we will merely touch on the genius of the Simmonz brothers and a few of their band mates in the next few paragraphs. With numerous band names like Speed Limit, Aura, Dreamer, Ezekiel Steel, Mad Habit, Dorcha, Passion Temple, Assasin, Assault, The Rock, The Stand, and on and on and on…The Simmonz brothers are definitely some of those rare musicians that make you sit back and scratch your head and say why are these guys not headlining arenas? Many incarnations of Nashville hard rock bands have seen a Simmonz throughout the 80’s and 90’s. While the laundry list is long, many notable members have graced a band with a Simmonz brother. There was Dreamer, who would feature Kenny Earl (who would later be known as Rhino in Manowar) and Bobby Lee Morgan. There was Assasin who had drummer Jim Phipps punding the skins. Jim would later go on to be the drummer in Every Mother’s Nightmare. Simmonz at one time or another also featured Mike Easlo, who would eventually play with a band called Lust, that gave Ron Keel his start. Another version of Simmonz, known as The Rock and then The Stand featured Gus Palas (GVPIII). At one point, the brothers teamed up with Paul Ebersold (who wrote Kryptonite by Three Doors Down). They recorded with legendary hard rock producer Michale Wagener (Dokken). While headline tours and front-page fame may have alluded the brothers, they have not sat by idlely. In recent years, you could witness Paulie playing with great artists like the Legendary Shackshakers, Reverend Horton Heat, Petra, and Black Oak Arkansas, and Mike with Nashville’s Big Rock Show featuring mebers of Winger, Hair Of The Dog, and Skid Row. This barely sums up all that the brothers have accomplished, but gives you the reader an idea of what has transpired over the last 25 or so years; and that it now was time for the world see and hear some of Nashville’s finest hard rock. All The Wrong Reasons Feel So Good feature The First Records EP from 1988 backed up by several previously unreleased tracks