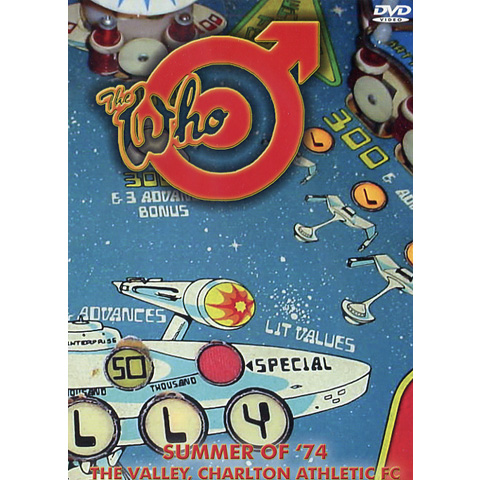 The Who played two gigs at Charlton Athletic’s football stadium in the mid-Seventies. The second, in 1976, was one of three one-day festivals hosted by the band that summer on their Who Put The Boot In tour (the other being Glasgow and Swansea). But the 1976 gig was spoiled by ticket forgery and gatecrashers, although unlucky punters who were turned away – despite having tickets – were given a free bus ride to Swansea, which was a nice gesture, if a bit of a hike. But it was the 1974 gig at the South London football stadium that sticks in rock’s memory. The Who had released Quadrophenia the previous year and had most recently been touring around France playing it. They had, typically ambitiously, been using backing tapes with sound effects and atmospherics in a series of winter gigs that were at best a qualified success and sometimes bordered on the shambolic. For this Summer 1974 tour, they got back to a more traditional sound. Pete played a solo show in the April and the band did a low-key event in Oxford – playing their old classics, not the Quadrophenia material – and this May 18 gig at Charlton was the biggest event signifying a move away from shows based fundamentally on their great rock opera. The Charlton 1974 might not have been their most technically accomplished, but in terms of a joyous celebration of what made them one of the most thrilling live bands of the time, and indeed of all time, it was a great showcase. Mention must be made without further ado of Keith’s drumkit, which is absolutely, hilariously massive. He has 11 tom-toms and – because you never know if one will be enough – TWO huge gongs. They don’t make them like that any more. Anyway, the day. Some 50,000 arrived with doors at noon to see support including Lou Reed, Humble Pie, Bad Company, Lindisfarne, Maggie Bell and Montrose. The weather was pretty decent, although there were quite a lot of fights in the crowd throughout. The Who came on stage at 8:45 and launched into a medley that kicked off with I Can’t Explain, Summertime Blues and Young Man Blues.There’s some powerful harp from Roger and some typically chunky, balls-out base from The Ox on a soaring, storming, urgent celebration of desperate youth. Substitute is another corker. From Quadrophenia, they played Drowned, Bell Boy – which got a riotous reception for Keith Moon’s vocal – and 5.15, although the last of those was pretty ropey and, along with I Can’t Explain, was left off a lot of the recordings of the event. Pete said that he was dead drunk for this gig – as he was for all of their sets at Madison Square Garden later in the summer – and also that he did not enjoy the atmosphere much at Charlton. He has said he felt there was a violent atmosphere in the stadium and does not regard this as among their finest live shows. And it’s true that, in terms of musical virtuosity, this does not necessarily show the band at the very peak of their powers. That being said, the crowd absolutely loved the set and the sheer passion and energy they transmit to the band nevertheless inspired a thrilling performance. The highlight of their one hour 45 minute show was the medley of Naked Eye and Let’s See Action right near the end, which is blinding stuff, a real gem. They closed with the first-ever performance of what the band knew as My Generation Blues, a slowed-down, dense and dirty 12 bar blues take on their famous hit. Although Quadrophenia was a groundbreaking, brilliant piece of work, this Charlton gig marked a pronounced move away from attempting it live in any depth. For the next quarter century, The Who gigs would take on more the format of a greatest hits package. Anyone at Charlton in 1974 would feel that they saw a hell of a show from one of the most important and exciting British acts of all time.