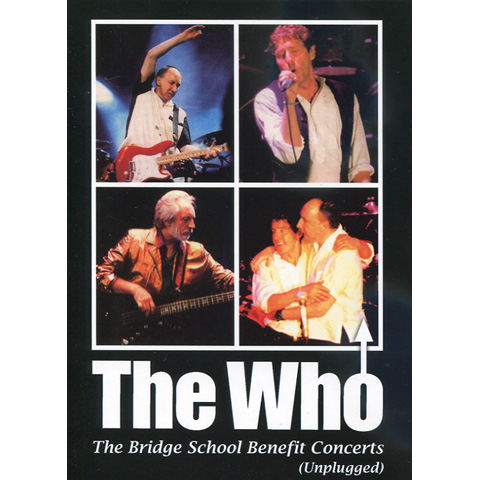 The 13th Annual Bridge School Benefit (held on the 30th and 31st of October 1999) at the Shoreline Amphitheater and its a concert that leaves good memories, the magnificent California sunny weather, the overall nice atmosphere, the singular feeling of being in the presence of true greatness — all of this brought more than one person to tears at least once during the course of the weekend. After a long day the final act went on stage at 12:30 at night and holy mother, there’s Roger and John and Pete and god, even Rabbit is there on keyboards! It’s them! Its The Who! It was like running into your best friend from grade school who you haven’t seen in 15 years, you look at them and you’re in disbelief and they look so great and you are so happy to see them, you just want to run up and hug them and look in their eyes and say, ‘I am so happy to see you! You look great! I missed you so much!’ The band seems to enjoy themselves and goes into the opening chords of Substitute. The show is great but at times it feels weird as this is all acoustic. I mean, this is the Who! This is the band who were in the Guinness Book of World Records as the Loudest Band In The World. There are times you just wants it to rock out but otherwise you’re surprised with whats happening in front of you. With friends on stage and at the sides of the stage like Neil and Pegi and his manager, Elliot Roberts, everyone rocking out. There are the guys from Green Day a little further off in the wings, singing and dancing along. And it was classic Who. They yell at their soundman. Roger plays the dumb blonde. Pete makes an inappropriate comment while going off on a tangent while trying to explain something fairly important. John stands there shaking his head. Yeah, this is a Who concert, not a fucking tea party! Okay, so Roger’s voice went out a bit, they couldn’t hear themselves, it was late, they were tired — but if you did not get on your feet and cheer and sing along during Won’t Get Fooled Again this Saturday night then I feel sorry for you, because I don’t know what else could possibly move you then. Then midday on Sunday “those guys from Shepherd’s Bush” walked back out onstage. It may have been too early, as Roger complained when he fucked up the words to Substitute (prompting Pete to introduce I Can’t Explain as another song with difficult lyrics) but this band was absolutely unstoppable today, in wonderful form, sounding even better than they did last night. Who Are You is nothing short of tremendous. Pete starts telling an abbreviated version of the story behind the song and the bridge in which everyone is jamming and soloing is close to ethereal. By the time they got to Won’t Get Fooled Again, they were just on fire