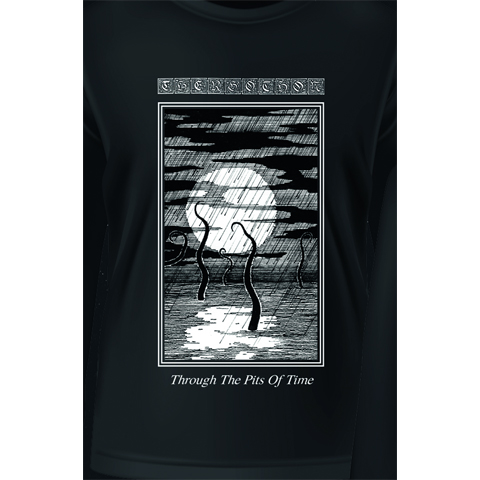 A beautiful 3 cassette box featuring the only full length album the band ever did as well as two of the bands demos, 2 posters, 4 postcards and a huge booklet and a numbered certificate. Limited 333 numbered copies

Thergothon was a Finnish doom band whose influence on the scene long outlasted the band’s own lifespan but it seems unfortunate that when a band taps into something truly otherworldly and occult, if you will, they don’t seem to be able to stay together for very long. They started life as a death metal act, progressing to slow, seriously heavy doom metal, later becoming classified as pure sadness and despair in musical form. In early 1991 they recruited a local friend Sami Kaveri as a second guitarist and it was in November 1991 that the ‘Fhtagn-nagh Yog-Sothoth’ demo tape was recorded, inspired by H.P. Lovecraft’s Cthulhu Mythos. In Autumn 1992 Thergothon started recording their debut album, ‘Stream From The Heavens’. Two tracks from the ‘Fhtagn-nagh Yog-Sothoth’ demo were reworked and recorded for this release. Non-metal influences including prog, goth, ambient and experimental music helped to shape the band’s sound and atmosphere further. Thergothon disbanded in 1993, before the eventual 1994 release of ‘Stream From The Heavens’ though over the years the band has earned a cult status in the underground through this single album. In the mid-later part of the 90’s the ‘Funeral Doom’ genre emerged. Thergothon was deemed as one of the originators of the sound and style and an important cornerstone for the whole genre. Whereas Stream From The Heavens conjures up images of vast, perplexing towers, symbols and primordial dread, Fhtagn Nagh brings up images of something that will a bit less indescribable, is still just as primordial and otherworldly as the full length. The skill this band had at writing songs and memorable riffs is quite impressive. Doom fans must get this at all costs, and everyone else should seek it out too.

Cassette 2: Stream From The Heavens
1. Everlasting
2. Yet The Watchers Guard
3. The Unknown Kadath In The Cold Waste
4. Elemental
5. Who Rides The Astral Wings
6. Crying Blood + Crimson Snow