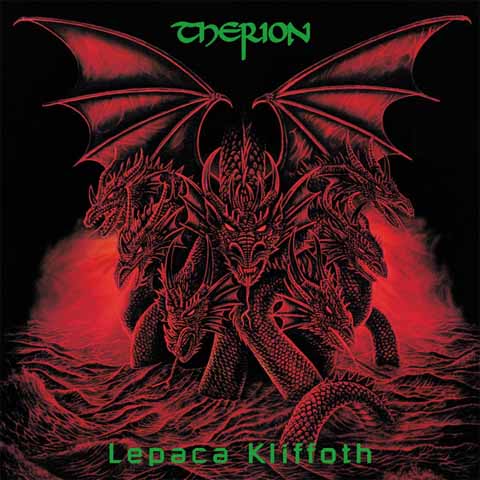 When Christofer came back from Switzerland, after recording a Messiah album, Nuclear Blast wanted to sign them. They agreed, recorded their first single, The Beauty in Black, which sold 12.000 copies in Europe without any special promotion. Then came this album and sales picked up a bit, when compared to their earlier efforts. Now they had pretty much left their death metal sound behind, picked up the heavy metal, which you could hear in Symphony Masses if only you listened careful enough, turning symphonic and drastically changing the vocals. They were originally growls, turning into grunts for the previous album – now they were some kind of hardcore screams. It sounds rather strange, if truth be told, and is not as great as Dan Swanos vocals on Theli. The bass playing on Ho Drakon Ho Megas was really striking, here there’s a new bass player. His name is Fredrik Isaksson and even though theres still an occasional solo, his way of handling the instrument is not half as busy as Andreas Wahls was. On the tour with Annihilator following this album Fredriks personal problems (including abuse) and Piotrs problems with Fredrik made him leave the band to be replaced by Lars Rosenberg (Entombed). But thats a later story. Lepaca Kliffoth is in a way even more experimental than Ho Drakon Ho Megas, because none of the new elements had really been tried in metal before, especially not mixed. So what are the new elements? Well besides Christofer’s hardcore screams, he also manages to produce some bass-baritone vocals – and this is perhaps the start of the operatic vocals they’ve been using more and more. There are more keyboards than ever before, more melodies and some Persian influences. Today oriental and Egyptian-sounding riffs are commonplace, but they weren’t in 1995. The production is better than ever before, and so is the guitar playing, perhaps as a result of lessening the downtuning. The riffs are really cool, and when combined with the keyboards you almost think of Theli. The keyboards are improved, and used a lot more. They provide melody, atmosphere and some of the brilliant, pulsating intensity that they showed off on the next album. Sorrows of the Moon is a cover of a Celtic Frost song, providing some epicness to this album which otherwise showcases a certain speed in the drumming and generally more heaviness and headbanging than Symphony Masses. The title track sounds pretty much like Vovin with edge, the symphony is there but it’s combined with much more intensity, and it’s tuned lower. Evocation of Vovin is a song that has everything, intense intro, progressions, a kick-off with distortion and vocals, transcending into a middle-part with perfect keyboards, continuing into one of these plodding yet headbanging parts where you just wait for the beat to pick up again. And it does, oh, it does. So, Therion got the pieces together and managed to develop their sound even further without sounding as odd as on Ho Drakon Ho Megas. People bought it, because this is some excellent metal, pioneering the symphonic metal and showcasing some excellent guitar work. For any person who likes Therion really.