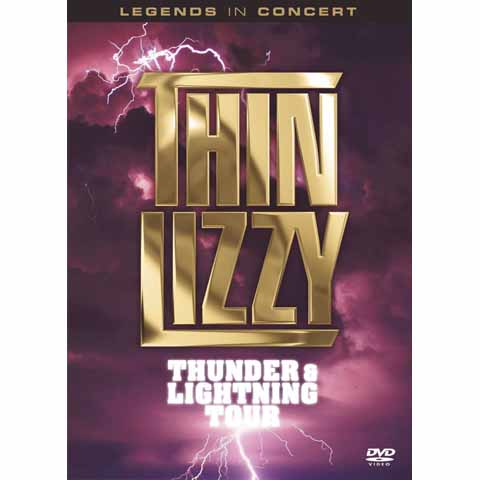 This dvd starts out with an introduction by former band members Eric Bell and Brian Robertson which together with producer Nick Tauber, relate their special memories of Phil Lynott, the iconic driving force behind one of rocks greatest live bands. The concert that follows captures the band on one of the final legs of their Thunder And Lightning Farewell Tour and was filmed at Royal Dublin Society Showground, Ireland on April 9th, 1983. While the farewell tour showed Thin Lizzy grinding to a halt and the tour was put together to pay off the band’s bills, this disc is still essential for any fan of the band. This 55 minute show was originally broadcast on TV and was filmed with multiple cameras so there some nice shots of the full band and the individual members. This isn’t a big glossy pro-shot (by today’s standards) video though as the lighting isn’t always the best, which leaves some shots too dark. Overall, the video has the feel of something that was filmed for in-house broadcast rather than for TV. The sound on the disc though is perfect and sounds like it came straight from the mixing board. (Note: there is no crowd noise in the mix). Performance-wise, Phil doesn’t seem very animated and looks like he is holding on for dear life – there is no trace of the breezy rouge from the Live And Dangerous or Sydney 78 dvds. The rest of the band sounds in reasonable form but, again, this isn’t the tightly honed performance of Lizzy’s earlier years. Brian Robertson looks to be in great form and John Sykes and Scott Gorham take frequent (but not overpowering) solos standing atop of pedestals on either side of Phil. (Darren Wharton’s contributions really aren’t heard in the mix). The set list for this show seems close to other shows on the farewell tour though most of the other shows that I’ve heard include an additional song or two. What seems a little strange on this show is that Dancing In The Moonlight and Whiskey In The Jar aren’t played in their entirety but rather slotted into Rosalie and it is almost as though the band was racing against an end of night curfew.