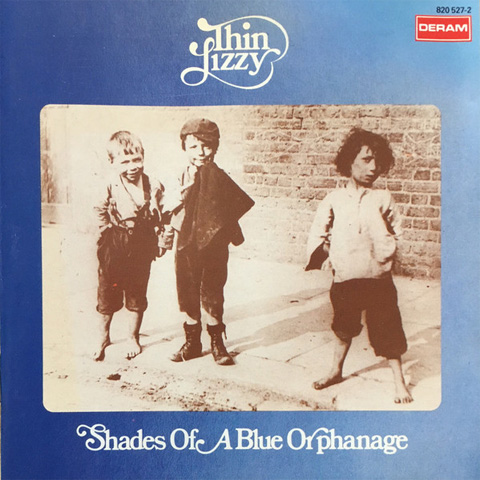 Named after the musicians previous bands (Bell’s Shades of Blue and Lynott and Downey’s Orphanage), the disappointing Shades of a Blue Orphanage proved that Decca Records had absolutely no idea of what to do with Thin Lizzy. The complex arrangements of the title track and “The Rise and Dear Demise of the Funky Nomadic Tribes” are as overblown and disjointed as their titles. “I Don’t Want to Forget How to Jive” is a lame, ’50s-style rockabilly number, and “Call the Police” is only saved by Lynott’s captivating tell-tale lyrics — something at which he would later excel. Lynott is equally eloquent and personal on the piano-led “Sarah,” written about his grandmother and not to be confused with the song by the same name written for his daughter seven years later. The album’s few, truly bright moments are confined to the aggressive hard rock of “Baby Face” and the charming, descending riff of “Buffalo Gal,” a melancholy, mid-paced ballad in the style which would become a Lynott trademark.

Track list:
1. Rise And Dear Demise Of The Funky Nomadic Tribes
2. Buffalo Gal
3. I Dont Want To Forget How To Jive
4. Sarah
5. Brought Down
6. Baby Face
7. Chatting Today
8. Call The Police
9. Shades Of A Blue Orphanage