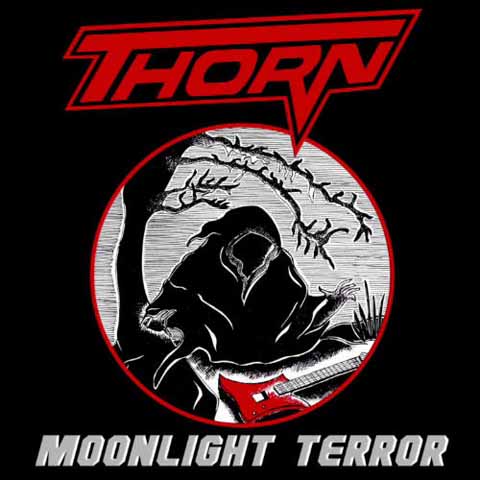 Coming from Dallas, Texas, Thorn is a band that all you worshippers of obscure cult metal can take a closer look now that their cassette album has been released for the first time on cd. Thorn was formed in 1986 and by the end of that year they had managed to get the track Street Fighters for the split album Metal Cruelty by Heads Up Records. The cassette album Moonlight Terror was recorded during the summer of 1987 and saw the light of day later this year. Unfortunately, in spite of the fact that the band had toured to promote the album until 1991 nothing could avoid the band’s break up in 1992 eventually. Musically speaking we have a definitely powerful and melodic Heavy /Power with great quantity if you can ignore the poor production. It’s not some extra ordinaire or a forgotten gem but it contains some powerful speed and aggressive riffing, like a subtle version of Mox Nix or Tyton. The main riffs are based on standard chugging rhythms as we get some of power metal soloing but it also mixes a rock influence too. The cd version includes the songs from the Moonlight Terror cassette album, plus an unreleased studio song that was recorded in 2012 in a friendly jamming together and a live performance from the 2014 reunion concert,