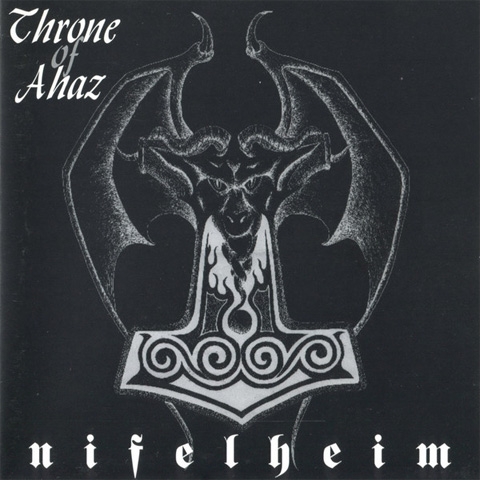 No Fashion release pressed by SDC

The Scandinavian black metal band Throne Of Ahaz was founded in the cold forests of the Northen part of Sweden in the winter of 1991. Their debut demo At The Mountains Of Northern Storms was released the year after. The demo showed a band with influences from Bathory, Kreator, Merciless, Darkthrone and Tiamat. Their debut album Nifelheim was recorded in 1993 but their record label No Fashion records didnt release it until 1995. Maybe the history of this album and the band had been different if the album had been released on time. Unlike their second, more melodic album On Twilight Enthroned, Nifelheim does not have that typical Swedish sound. The sound here is like a winter night, piercingly cold yet clear, favouring the trebles. Don’t worry, it is not sterile, but stays organic and sufficiently raw to maintain the atmosphere. The riffs are very varied, ranging from typical Scandinavian tremolo-picked buzz-saws to more old-school thrashy ones, and they are always played in a dirty yet flawless way, like they should. The guitar-sound on Nifelheim is icy, one of the coldest I have ever heard (and I have heard a lot). On top of that, Beretorn is howling like a possessed wolf. His vocal expression is extremely hateful. The pace of the music is mostly mid-tempo or even a bit slower than that (not Black Doom Metal-slow), but there are enough fast parts as well to keep it varied. The eight tracks are rather compact, simple but well written; there are no useless gimmicks, only straight grimness. Although keyboards are present in some tracks, they are very scarcely used. Nifelheim unfortunately, seems to be a relatively unknown album, these days. It is a shame, as Throne of Ahaz played raw, cold Black Metal, with a lot of old school influence, that sounds quite superior to many albums that were released by their peers, around this time. Maybe, if it had been released after it had been recorded, rather than some time later, it would have made more of an impression. To put it simply, if you appreciate A Blaze in the Northern Sky, and you don’t mind something that is a little slower but with a similar feeling, you won’t be disappointed with this. The sound is fairly standard, without breaking any new ground, but it’s solid, nonetheless. If not quite a classic, it comes close to being one, so if you are interested in Black Metal in the true sense of the word, then I can highly recommend it.

Track list:
1. Northern Thrones
2. An Arctic Star Of Blackness
3. Where Ancient Lords Gather
4. The Dawn Of War
5. Nifelheim
6. The Calling Blaze
7. A Winter Chant
8. The Kings That Were