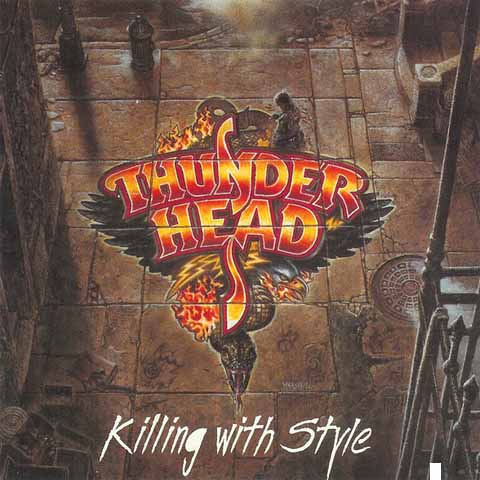 Reduced price due to cut out.

After an unsuccessful audition with Victory, American vocalist Ted Bullet met ex-Viva guitarist Henrik Wolter and ex-Talon bass player Ole Hempleman in a Hanover bar, and with the addition of drummer Alex Scotti to complete this German-based band, recorded a demo that quickly prompted a contract with Intercord. Behind The Eight Ball was recorded when the band had hardly played a live date, but was a reasonable debut in a basic metal style similar to the Almighty’s early work, and sold well on the German market as the group played with Victory and Uriah Heep in the USA and in the UK and Europe with Motörhead. Busted At The Border and Crime Pays followed in the traditional metal footsteps of the debut, although Thunderhead became a more cohesive band as a result of their live work, with more power metal overtones to their heavily guitar-based sound. They maintained their level of success in Germany, undoubtedly helped by their frontman’s English vocals and outrageous onstage demeanor, but they remained a minor act in global terms. The bands 1993 album, Killing With Style, is a rehash of their previous ones while they at the same time relied more than than ever on good melodies. Killing With Style is an album whose real class only becomes apparent to the listener after several listens, as there are too many elaborate guitar parts and solos to immediately recognize its format. A fine hardrock album well worth checking out.