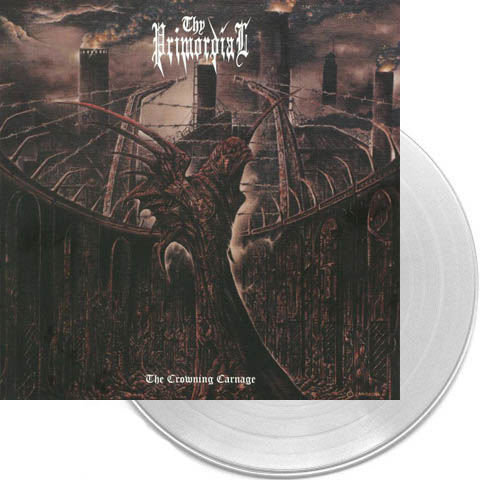 Swedish black metal act Thy Primordial were formed in Mjolby back in 1994. If you haven’t heard this band then imagines Dark Funeral, but without all the Satanic stuff and the monotonous riffs of ‘Diabolis Interium’. Replacing that, are awesome lyrics and amazing riffs that don’t bore you. The singer’s scream isn’t as high pitched as Ihsahn but is still awesome and really brutal. Drumwork is outstanding and his easily comparable to Trym’s, (ie Emperor’s new drummer). Trem picking dominates this album but riffs vary throughout the album which gives it a refreshing feel. Guitarist uses stacked power chords and major thirds and sixths to give the listener a well deserved departure from the everyday satanic minor and diminished intervals which dominate lots of black metal band’s songs. If you’re sick of other satanic black metal and you want an awesome refreshing new band to check out which is still brutal as hell, then check out ‘The Crowning Carnage’ by Thy Primordial