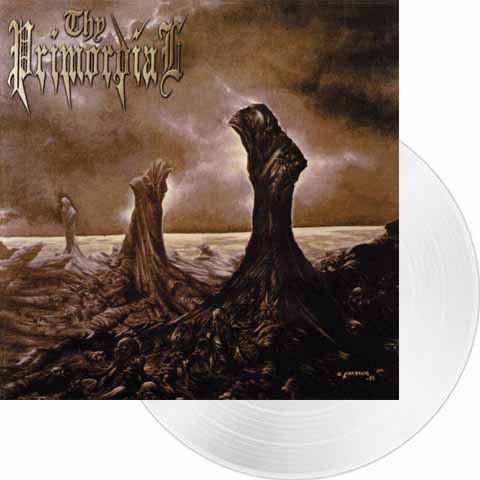 Thy Primordial -The Heresy Of An Age Of Reason lp [white]

With surprisingly little time elapsed since the release of their fantastic third album, At the World of Untrodden Wonder, Sweden’s unjustifiably unrecognised Thy Primordial have now, anno 2000, crafted their finest work of retaliation to date. Blasting in true Thy Primordial style, opener Ceased to Decay showcases the bands knack for melding epic melody lines with pure aggression. As a moment of calm deceptively seems to settle in, writhing, serpentine riffs finely woven into a sudden storm of blasting drums and growling bass brutally lash out in venomous, hateful and melodic rushes, laden with spectacular, intense drumming and vocalist Isidor’s harsh, grating and baleful screams. The highly impressive double-pedal pummelling of Morth sets the score right from the start: Thy Primordial are faster and tighter than ever before, launching into attacks of breathtakingly furious, yet disarmingly melodious Swedish mayhem. The rage which animates The Heresey Of An Age Of Reason is truly tangible, and the incredible, bewitching melodic guitar work, at times tinged with the icy fury of early Norwegian black metal, can barely claim to shroud the sheer bestial anger that emanates from this thundering, rabid black metal opus. Comparisons with countrymen Dark Funeral will no doubt be made, but rest assured that Thy Primordials material rises far above the oft monotonous straight-ahead speed of the former. Masterfully tamed musical savagery is indeed what the album perfectly embodies; Thy Primordials fourth full-length exudes aggressive, outstanding musicality, played by five competent and inspired musicians. While one yearns for the stronger melodies of their early work, the sheer power and intensity on this album crushes any uncertainties one might have about this band’s ability, as well as providing a testament to the faultless Sunlight production. In fact, the bands skills for keeping such relentlessly fast material from sounding messy or formulaic has always been remarkable, and the band looks to be honing it to a finer edge with every album. Despite the label’s apparent lack of distribution and advertising, this record is brimming with an expensive production and layout worthy of much bigger labels. At a time of the ever-renewing metal cycle when black metal seems to have slipped into a coma, Thy Primordial have dealt a fourth merciless blow with The Heresy Of An Age Of Reason, and spawned an album which reveals that the chthonic forces lurking in the Swedish scene are certainly as talented and worthy of recognition as the Swedish black metal flame-bearers Marduk and Dawn.

Track list:
1. Ceased To Decay
2. Ex Opere Operatu
3. Disguised As Beings Of Light
4. The Heresy Of An Age Of Reason
5. Mere Are They
6. Tyrannize
7. The Enigma Of The Fall
8. The Dead Live / Shining Crown Of Night