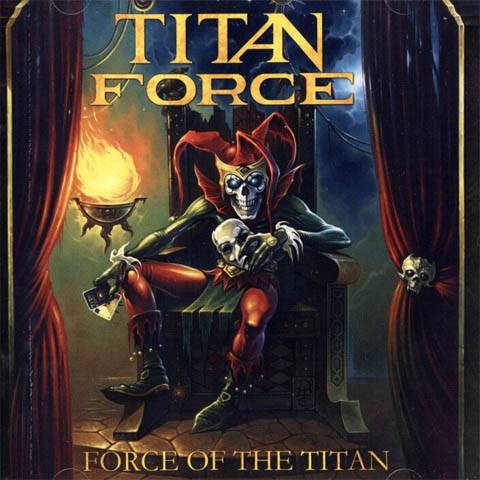 Titan Force was formed as Titan in Colorado Springs, Colorado, in 1983 by Mario Flores (guitar) and his siblings John Flores (bass, vocals) and Stefan Flores (drums). The line-up was completed by Bill Richardson (guitar, keyboards). In 1987, the band recruited Jag Panzer vocalist Harry Conklin (who at that time was involved with Satans Host) and went on to release two albums: Titan Force (1988) and Winner/Loser (1991), which are considered classics of the progressive Heavy/Power Metal genre. Force Of The Titan is a collection of 12 previously unreleased studio tracks recorded in the 80s: the complete demo from 1985 – recorded when the band was using Titan name, featuring John Flores on vocals – and eight classic tracks from the first two Titan Force albums in alternate and previously unreleased demo versions, with Harry Conklin on vocals. It is really amazing that they maintain the same energy, aggression and edge of the classic 80s Heavy Metal, combining it with the technical approach of Power/Progressive genre. I would like to start by saying that Harry’s voice is impeccable throughout the entire compilation. A 9-minute complex and melodic song that’s not so focused on the lyrics but on the artistic mechanism is Fist To The Sky. It combines long and elaborate guitar solos with short vocal interventions and some playful experimental notes. Fool On The Run – an ode to Iron Maiden, is truly a neckbreaker with powerful rhythmic riffs. One of the highlights of the album has to be Dream Escape. After a 2-minute we hear a very powerful Harry accompanied by an old school guitar, the voice oscillating from very low to very high notes, an absolute delight for a metalhead ears. What else can one say about a band so old and so talked about? The album, like the previous ones, is amazing; the perfect proof that metal is everlasting. As Bart Gabriel says, Titan Force is truly one of the most amazing heavy metal bands that ever walked the earth.