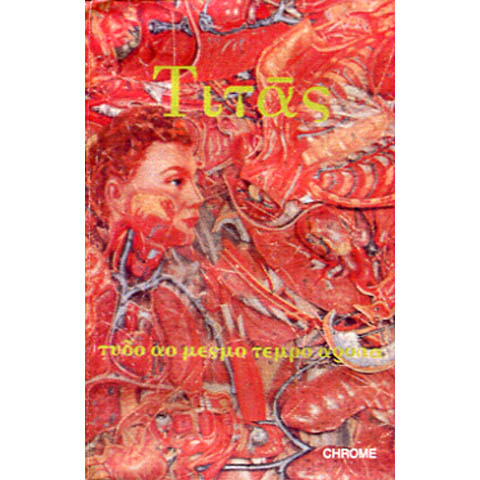 Reduced price due to inlay cover being vg-

One of the most important groups of the Brazilian rock style that blossomed in the ’80s, Titas, formed in Sao Paulo in 1982, singularity was affirmed by their intelligent lyrics, which sometimes resorted to concrete poetry and social criticism. The group eventually became mainstream and lost their cutting edge through orchestrations and a declared pop approach, simultaneously selling one million copies of their Acustico album in 1997. After the experimental O Blesq Blom album in 1989, Titas decided to scale back their ambitions and just play some good old fashioned rock n roll for a change. The result was 1991’s aptly titled Tudo Ao Mesmo Tempo Agora (translation: All Together Now) — a stripped-down affair characterized by simplified guitar riffs and arrangements overlaid with adequately minimalist, but still deeply intriguing wordplay. And thanks to the absolute tour de force that is opener “Clitoris” — a brilliantly explicit ode to the female anatomy riding an irresistible circular riff and whose lyrics would be downright lewd if they weren’t so scientifically declared — this direction appears to be a roaring success. Sadly, this illusion lasts but a moment, as the album’s first half quickly descends into a series of surprisingly tuneless and repetitive dirges. But theres also the excellent single “Saia De Mim” and the all-too-brief ticket to paranoia called “Flat — Cemiterio – Apartamento”. Overall a very mixed album sometimes rock and sometimes punk and grunge and sometimes just bizarre.