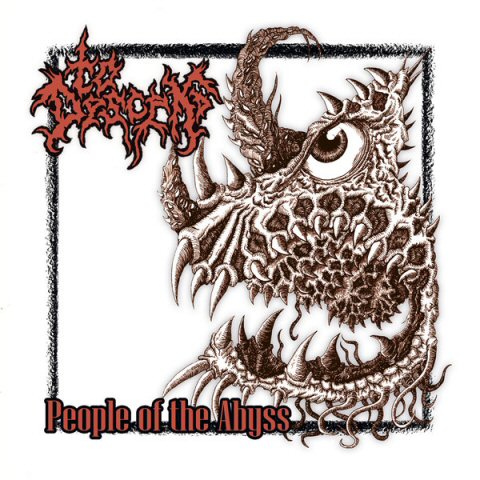 To Descend ‎–People Of The Abyss mcd

People Of The Abyss is the debut release from To Descend featuring Rogga Johansson from Paganizer, Ribspreader etc on guitar and bass. Here we find Rogga teamed up with vocalist Jens Johansson from Murder Corporation and Megaslaughter. Jens distinct barking ability and sound should catapult To Descend into the limelight with vocalists like Chris Barnes and Martin Van Drunen. The first track “Paled Puppet” is their best foot forward on this E.P. It really defines the audible side of the death metal genre. The vocals are pitched in the fashion of a deep growl with an occasional Cannibal Corpse style higher pitched “aaaahhhhh’s” rounding out a verse and entering the chorus. The speed picking is precise and the overdubbed harmony provides more drama and texture. The E.P.S title track “People of the Abyss” starts out like Catastrophic’s “Hate Trade” or Jungle Rot. Very thick and heavy, some groove and simplistic to start. While “People of the Abyss” starts solid and slow it kicks into a faster tempo, still with grove, and still solid. The solo has a lot more melodic features than death metal and it is short and sweet, and I mean short. There are brief moments among the side swiping beats that hit like a collision where I was reminded of Gorefest. Not so much the blast beat death metal but the stronger bash beats. Die As One is gripping and relentless. The musicianship brought to the table by To Descend is brilliantly evident throughout. While the bass isn’t easily separated it does blend and provide that extra oomph, thus passing the car stereo test. People Of The Abyss is the result of musicians with years of expertise under their belt from separate ventures coming together and creating the perfect monster.