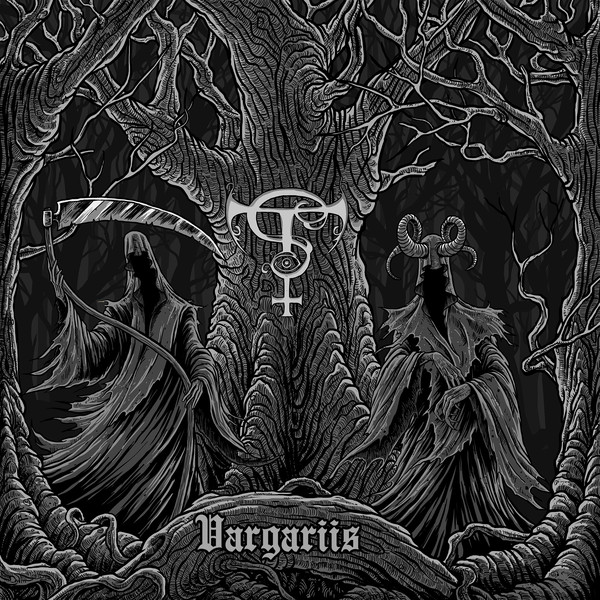 Ever imagined or dreamt of being thrown into a post-apocalyptic world, where everything looks doomy and the end of the world looks like it would be in near future? Listening to Doom Metallers Tombstones 2015 full length album Vargariis transported me to such a world. This is an album that intrigued me right from its cover artwork. The album starts with a typical slow and heavy Doom Metal song in Barren Fields and going the full monty by clocking in well over 9 minutes. The song instantly has a unique distinct sound that the band brings to the table and is not easily comparable to its contemporary Doom Metal bands. With shades of both slow and fast paced Sludge being used in the song at different timings, the band is able to bring in a wide variety of psychedelic Doom to the listener. Chugging with mid-tempo sharp drumbeats, And When The Heathen Strive, Vargariis Rise is another really slow, heavy and powerful song. The core of the band’s music here, as is usually with such Doom bands, is the thick juicy guitar and bass riffs, and with Tombstone, you add some nasty guttural vocals, you got some insane Doom Metal. These guttural vocals are not of Death Metal style, but more of cleaner vocals, but still are difficult for the listeners to catch the lyrics. But it’s the riffs that make you forget about everything else. They are neither too long, nor too short, making it ideal for both serious connoisseurs of Doom Metal, as well as new fans, to dive into the music, though the longer format of the songs may still be a hindrance for those who are not regular listeners of the genre. Oceans Of Consciousness surprises you with its extremely fast pace and chaotic sound right from the beginning of the song. It’s almost as if the band intentionally wanted to surprise and shock the listeners a bit who were expecting a similar slow and thick riffage song. But the song gets back to the band’s sweet spot after around 1:30 minutes, as the band blasts slow thick and heavy Sludgy Doom riffs. The vocals here are almost faint and it is intentionally made to sound atmospheric and low volume. The song oscillates between past pace and slow pace and in doing so, is able to utilize the vocals in different ways. And like mentioned earlier, the chaotic guttural vocals surprisingly works really well for the band in this type of music. The song is more than 10 min long and at around 6 min, the song gets really slow and almost feels like the listener is literally in a large empty room with these slow haunting riffs being played around. The sound again slowly gradually picks up pace and volume for the rest of the song. The manner of repeating the same riff for a very long time, with all the aforementioned gimmicks, makes this one hell of a song. The Dark High is another thick riff driven song oscillating between mid-tempo and slow tempo pace and does a wonderful job at keeping the listener interested all the way through the 9 minutes of the song. Underneath The Earth is a bit more chaotic song and has a more drone-ish sound, reminiscent of Eyehategod. The song has some insane low tempo melodic riffs at around 6:30 min, and utilizing the melody, the band gets back to the heaviness in a very intelligent and seamless manner. Pyre Of The Cloth has influence of Electric Wizard, Eyehategod and other similar Doom / Sludge veteran bands written all over it. It starts off with some rhythmic drumbeats before the song turns into this chaotic Sludgy train of riffs that take into a different world that I originally mentioned. The song turns into a trippy Stoner song in the latter half and frankly I wasn’t complaining one bit. It’s an amazing way to end this album and has all the goodness that fans of the genre would ever expect from a full-length album in the genre. Vargariis is one of the most serious attempts at dark slow Doom Metal that I have ever heard in recent times. While it’s not perfect, it definitely is a serious attempt by Tombstones in trying to achieve what they started. Seasoned fans of Doom and Sludge should dig this, but if you are not, this is not a bad way to get into the genre too. One of the better 2016 Doom Metal albums that I have heard.

Track listing:
1. Barren Fields
2. And When The Heathen Strive, Vargariis Rise
3. Oceans Of Consciousness
4. The Dark High
5. Underneath The Earth
6. Pyre Of The Cloth