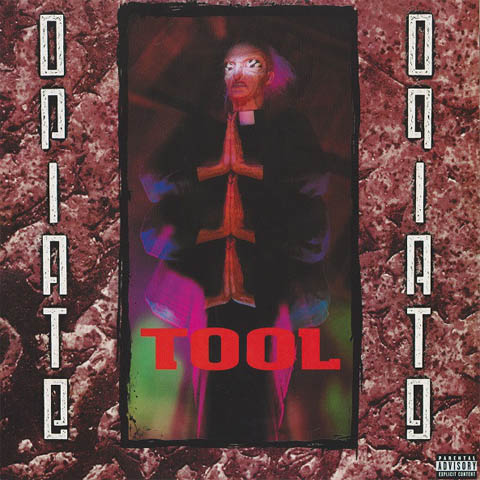 Tool’s greatest breakthrough was to meld dark underground metal with the ambition of art rock. Although Metallica wrote their multi-sectioned, layered songs as if they were composers, they kept their musical attack ferociously at street level. Tool didn’t. They embraced the artsy, bohemian preoccupations of Jane’s Addiction while they simultaneously paid musical homage to the relentlessly bleak visions of grindcore, death metal, and thrash. Even with their post-punk influences, they executed their music with the aesthetic of prog rock, alternating between long, detailed instrumental interludes and lyrical rants in their songs. Tool had a knack for conveying the strangled, oppressive angst that the alternative nation of the early 90s claimed as its own. So, Tool were able to slip into the definition of alternative rock during the post-Nirvana era and in 1992 the band released the Opiate EP. In retrospect, Opiate seems a little haphazard, but it’s possible to hear the seeds of Tool’s oppressively bleak, cerebral metal in such cuts as Sweat and Opiate. The two live tracks, Cold and Ugly and Jerk-Off, don’t sound out of place, since they share the same churning riffs, black noise, and doom that characterize Tool’s sound. This is not as developed as either Undertow or Aenima, but it’s possible to hear the roots of those albums all over this EP.