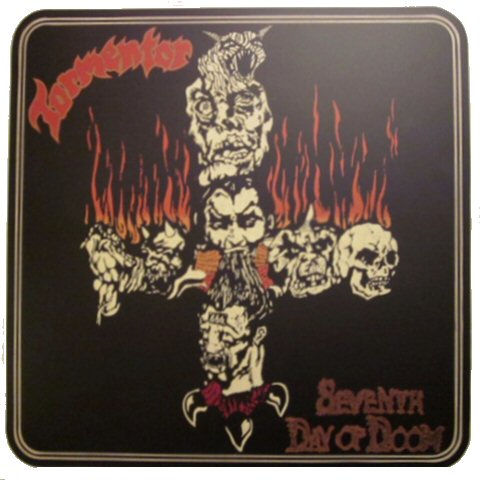 2017 pressing on black vinyl with insert and poster

They might not be the most prolific black metal band, possessing an even more elusive aura than Mayhem, but Hungary’s Tormentor is one of the pioneers. Long before black metal was given a standard, one could say that Tormentor had already embraced that essence which would become the law. In 1987 they recorded their ‘7th Day Of Doom’ demo and in 1988, their legendary ‘Anno Domini’ release. To say that they had grave impact on the Norwegians would be a severe understatement. But it wasn’t until after the release of Mayhem’s ‘De Mysteriis Dom Sathanas’ that more people would take note of the obscure and chilling voice that belonged to none other than the cult man Attila Csihar. This release features the original first demo ‘7th Day Of Doom’ pressed on a 160g black vinyl. This quirky demo was not per se way ahead of it’s time, but it was completely different from anything around that era, or anything released now for that matter. One might argue though this isn’t entirely purebred black metal. It’s…weird. On the other hand, I couldn’t call it anything else but black metal. It’s basically a peculiar form of thrash with Attila Csizar’s peculiar raw screams over it and a Satanic theme. If you want the precursor to the single best black metal album ever then buy this one now.