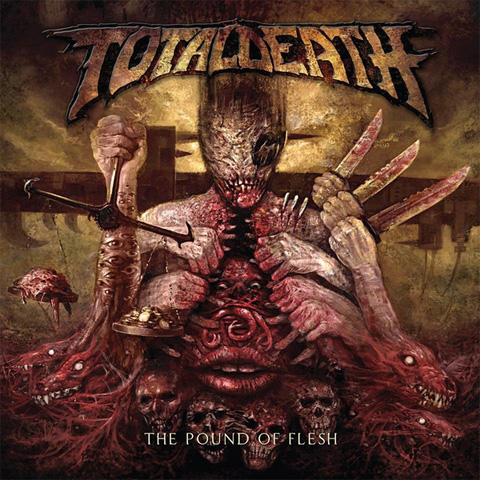 Bam, brutal thrash! Brute momentum carries the majority of The Pound Of Flesh, with a clinical sense of understated melody weaving in and out underneath the primary armament. The album is dark, dingy, and somewhat left of the beaten path; evocative of some of Slayers earlier euphemisms but equally hard to consistently enthral. There is a slight air of dissonance and hard-lined knuckle-cracking resonance that makes much of the record a marginally engaging affair, despite a critical lack of speed and characteristic features. Demolition Hammer this is not, although it does fall somewhat close to death metal when it feels like it. There is enough meat on The Pound Of Fleshs bones to satiate most thrash metal pundits out there, and a distinct esoteric flair to the leads on numbers like Haunted and Morphine help balance out the caustic weight of the rhythm. Total Death pull off mid-paced thrash in the vein of 90s Forbidden fairly well, but this style comes with its own unique cadre of shortcomings, most of which rear their head at some point during the record. Azzimontis rants certainly embody one of the more consistent elements of the record, being a guttural, radiating secretion of controlled abhorrence. His delivery is choppy and abrupt, settling into a fine comfort zone when paired with the jouncing carom of the riffs. The band works their magic courtesy of exotic leads and stuttering tempo variation most evident on Four Walls – The Black Perfection and the vibrant title track. There is a shortage of blow-away moments, however. In fact, The Pound Of Flesh can easily be grouped with countless records that I enjoyed whilst spinning, but had a hard time recalling sections of later on. Maybe I have digested too much thrash over the years to get fully invested in a group of newcomers like this, and that is probably a shame. Total Death deliver most of what is promised, as this is a reasonably compact record, featuring in-and-out pit erupts that consistently test the proverbial triumvirate comprised of groove, thrash and death metal. It doesn’t really pin itself down to one particular epithet for more than a few moments, and while it isn’t going to break the creativity bank, I do like what these fellas are working with on a structural level. Fans from Arise-era Sepultura to Morbid Saint and Exhorder will find at least a few songs of engaging quality within, and I did get more mileage out of this record than comparative fare from the likes of Cycle Beating. The best track is easily Synthesis of Human Failure, which finally shifts to a higher gear and delivers some caustic speed. This is something the band needs to focus on to take their sound to the next level, as they certainly have most of the required pieces cemented in place and sealed in poser blood. Give The Pound of Flesh a chance, but I wouldn’t be surprised if only thrash die-hards found this a truly worthwhile experience as it stands. A band to keep an eye on in any event.