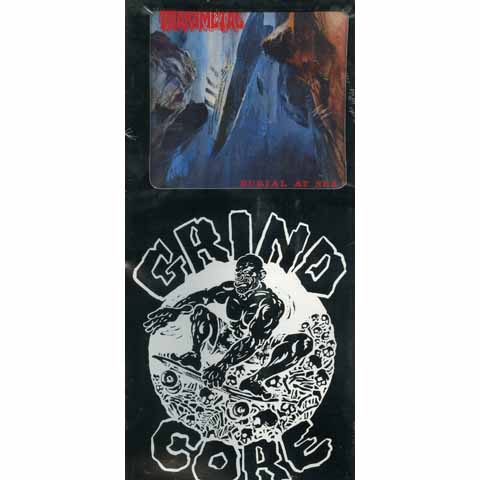 Still sealed longform box. The outer box has some bump and bent marks

Speed metal act Transmetal are among the very biggest of all Mexican rock acts. In the beginning the band was fronted by vocalist Alberto Pimentel, who featured on the 1988 debut ‘Muerto En La Cruz’, produced by Dark Angels Eric Meyer, and ‘Desear Un Funeral’ EP in 1989. For their second full length album ‘Sepelio En El Mar’ the band used Dark Angel member Eric Meyer as producer again. Alberto Pimentel on vocals and guitar, Bravo Juan Partida on guitar and Partida Lorenzo Bravo on bass and Javier Bravo Utresa on drums. The sound on this second album is just like the debut album a bit muffled and raw though also quite strong in a certain primitive way, which somehow fits the music pretty well. I would say that the production and style-wise, it’s pretty similar to the first Sepultura EP and LP minus a bit of the death metal influence. I always thought the Brazilians’ first releases didn’t have the spirit to back up the rawness of their early output, making it a bit sloppy and disjointed, so ‘Sepelion En El Mar’ comes across better to me than the flat ‘Morbid Visions’. The big problem here is a lot of the good material here isn’t used effectively. Check out the rumbling opening riff to the title track (it almost parallels the passengers of a certain-vessel-prone-to-colliding-with-icebergs flailing about before they inevitably drown)–why couldn’t they built the entire song around it? A lot of the catchiest parts are lost in time changes. Pimentel’s vocals are almost too unique to describe; the base is sort of the rough vocal style used by death/thrash bands in more exotic locales, not overly gutteral, but not clean. But they seem to be have been processed which at times gives the music an otherworldly effect, but at other times, hinders it. Unlike many other thrash bands of the time, there are no lyrical meanderings into the realms of societal/political commentary but instead the lyrics remain exclusively focused on death (effects of, torment by, vengeance by, etc). Sepelio En El Mar’ was also recorded at the same time with the songs sung in English. The English version would be released in Usa as ‘Burial At Sea’ in 1992. This is the English recorded version however Alberto Primentel has such a heavy accent that without the lyrics sheet you might not be able to tell whether he is singing in English or Spanish.