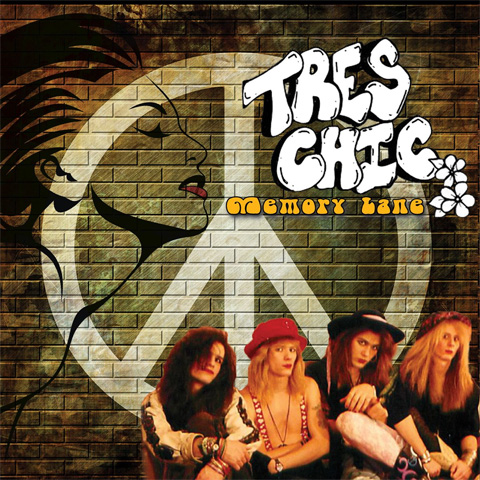 Tres Chic loves glam rock and Chicago loves Tres Chic. That’s how the band would like to be remembered. Tres Chic were a staple on the Midwest club circuit in the early 90s bringing their style of Glam Rock to those fans looking to express themselves through good-time party music and style. The band held their own for numerous years bringing the party wherever they played – and the locals knew that this was more than a show, it was a spectacle not to be missed. Tres Chic were born and at the Thirsty Whale (Chicagos premiere hard rock club), back when big hair and rack systems ruled the stage, and when a show was a show. The thing that really stood out about Tres Chic was that these Contempo shopping, street walking, misfits had more fun drinking and partying than anyone and that’s no exaggeration. They where loud, obnoxious, and very silly looking, but it didn’t stop them from sharing the stage with some of the coolest bands, playing some of the hottest venues and hosting a ton of garage and backyard parties. Often compared to the other favorite Chicago glam band Enuff Z’nuff, Tres Chic took the image of glam ten times further. But it only takes a little bit of money, a little bit of an eye for the eccentric, and a few cool chicks wanting to play dress up with you to create a solid Glam image. Without the music – you had nothing, and you didn’t last long all dolled up on the mean streets of Chicago. Tres Chic did have the music, and that was evident by the legions of fans who came out to every show to listen to the band run through memorable song after memorable song; but perhaps the biggest drawing power was the sing-a-long power ballad Memory Lane – hands down one of the favorite songs on the unsigned Chicago scene in the early 90’s. A power ballad in the late 80’s and early 90’s gave a band mileage, and this helped Tres Chic land many coveted opening slots for national touring artists. Other memorable songs such as Mothers Side, Laughing Clownz, Love Not War, Shy and Madame Roxy helped to confirm that Tres Chic was a band with momentum. This features Tres Chic’s first ever album, Memory Lane, featuring 20 tracks of glam and debauchery. The first 9 tracks comprise all of the bands studio recordings. Tracks 10 and 11 are taken from the bands rehearsals, followed by three early demo recordings and then five live recordings recorded at legendary Chicago clubs (The Thirsty Whale and the Gateway Theater). The last track is a nod to the fans, the scene, the era, and the party! You only know the down and dirty details…if you were there. Some things we can’t remember, Some you will never forget.