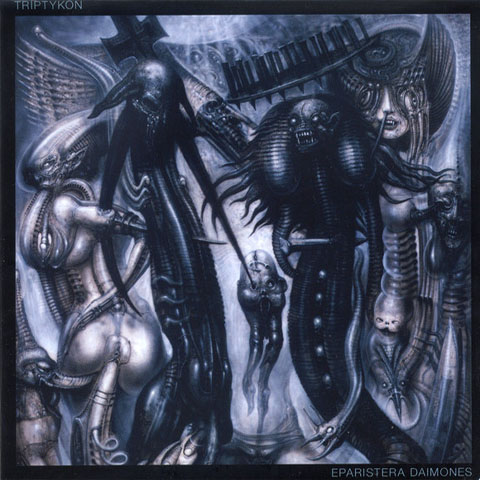 Official licensed made Mazzar records release in digipak made for the Baltic States, Moldova, Ukraine, Byelorussia and Russian countries

As Celtic Frost arose from Hellhammers ashes, so arises Triptykon from Celtic Frosts ashes. Created to further develop the darkness invoked by its immediate precursors, seminal black/extreme metal pioneers Hellhammer and Celtic Frost, Triptykon evolved from a Celtic Frost side project initiated by Tom Gabriel Fischer (a.k.a. Tom Gabriel Warrior), the group’s singer, guitarist, and main songwriter. Following five years of songwriting and recording sessions, the subsequent release of their acclaimed Monotheist album, and a 125-date world tour, mounting tensions began to cripple the resplendently disinterred Celtic Frost by late 2007. The situation eventually rendered it virtually impossible for Fischer to succeed in convening Celtic Frost for songwriting and rehearsal sessions for the intended follow-up to Monotheist. Vastly disenchanted and loath to resign to inactivity, Fischer resolved to establish what was to be a temporary substitute project designed to develop, record, and perform the music and lyrics he envisioned for the projected album. The core of the initially unnamed group was completed by Swiss underground bassist Vanja Slajh, a close friend from a past production project. When Fischer left Celtic Frost on April 2nd, 2008 then this side project became Fischer main goal. He named it Triptykon, an homage of sorts to the religiously-themed triptych paintings of the dark ages, such as Hieronymus Bosch’s Garden Of Earthly Delights (the right panel of which had been used as cover art for Celtic Frost’s Into The Pandemonium album in 1987) or Hans Memling’s The Last Judgment. As Fischer has frequently conceded over the years, these paintings have exerted a distinctive influence on his personal creative universe. Moreover, the name Triptykon signifies the third and final occult extreme metal group formed by Fischer after Hellhammer and Celtic Frost; i.e., the completion of his very own triptych. Get this album and dont give up on it. Fans of Monotheist and Fischers style of writing should take to it pretty quick, but only repeated listens will unlock the albums wonder. Eparistera Daimones is every bit a worthy successor to Monotheist. Fischer, a true genius of metal composition and experimentation, has proven that he is unwilling to let the breakup of a band stop his dark vision, and he continues to descend (or ascend?) into the monstrously heavy place he has discovered.

As you deteriorate
I shall create my kingdom
As you sink into the waves of darkness
I shall find my brightest light
As you perish, I shall live