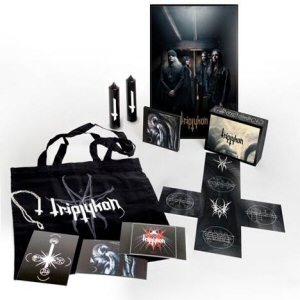 Limited deluxe box set, strictly limited to 2000 hand numbered copies worldwide and includes: Mediabook CD (incl. 32-page booklet and additional 12-panel fold-out booklet), a silver Triptykon-“T” necklace, 2 specially manufactured Triptykon candles, a Triptykon tote bag, a poster and 3 postcards. Tom Gabriel Warrior: Some time ago, I voiced my personal disapproval regarding the original concept for the planned Triptykon Melana Chasmata box set as scheduled for release. It is to Century Media Records credit that they listened and subsequently approached me to address my misgivings and create a box set that represents the group’s ideas and intentions far more comprehensively. I am grateful for such an open and creative collaboration, and I deeply respect Century Media Records for sparing neither effort nor expenditure to please Triptykon and the band’s audience. I wish record labels would have acted like this in the 1980s.

Triptykon the occult/avant-garde metal project formed by former Hellhammer/Celtic Frost singer, guitarist, and main songwriter Tom Gabriel Fischer (a.k.a. Tom Gabriel Warrior) second album, Melana Chasmata, was released in April of 2014. Melana Chasmata is evolving to be a vastly varied and strikingly dark and heavy album. The album’s title may be translated, approximately, as black, deep depressions/valleys. Song writing, arrangement, and recording sessions for Melana Chasmata have occurred, intermittently, since 2011. Much like Eparistera Daimones, Melana Chasmata is being produced by Warrior and Triptykon guitarist V. Santura, and recorded and engineered by V. Santura at his own Woodshed Studio in Bavaria, Germany, as well as at Triptykons bunker in Zurich, Switzerland. Says Warrior: We have been working on Melana Chasmata for some three years, in various shapes and forms. It’s not an easy album by any means, and to me personally it reflects an extremely complex gestation period, musically, spiritually, and, due to certain circumstances in my life, emotionally. At the same time, the album unquestionably reflects the continuity I was longing for so much during Celtic Frosts period of self-destruction and demise. Hearing Triptykon creating such utter darkness again and exploring the potential of these new songs has been incredibly invigorating and inspiring.