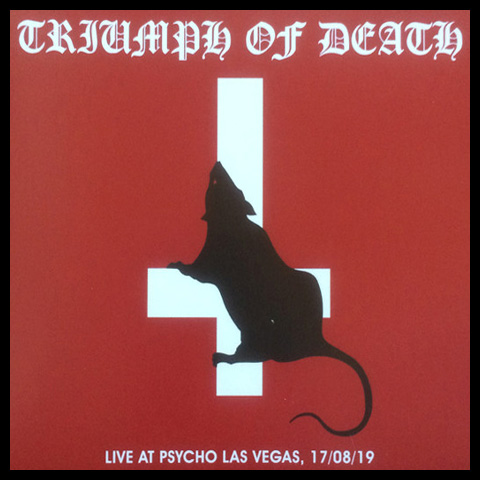 It’s rare that an artist can create a tribute band to their own music and have it be exciting and legitimate, but Celtic Frost and Triptykon frontman Tom Gabriel Fischer, AKA Tom G. Warrior, has pulled it off. Tom’s latest project is Triumph Of Death, a band dedicated to honoring Tom’s legacy in groundbreaking extreme metal act Hellhammer. The band — whose line-up also includes guitarist/vocalist André Mathieu (also of Punish and Wolf Counsel), bassist Mia Wallace (ex-Embalming Theater and Abbath), and drummer Alessandro Comerio (also of Forgotten Tomb) — marks the first time that Warrior has dedicated entire sets to Hellhammer material. The band initially only existed for two years from 1982 to 1984, and Warrior only rarely performed Hellhammer material with his other projects. The first show they announced was France’s Hellfest in 2019, but first they did two warm-up shows in Germany a few days earlier. After Hellfest, they performed more European festival dates and then one US date at the Psycho Las Vegas Festival at the Mandalay Bay Resort And Casino on the 17th of August 2019, where this album is recorded.