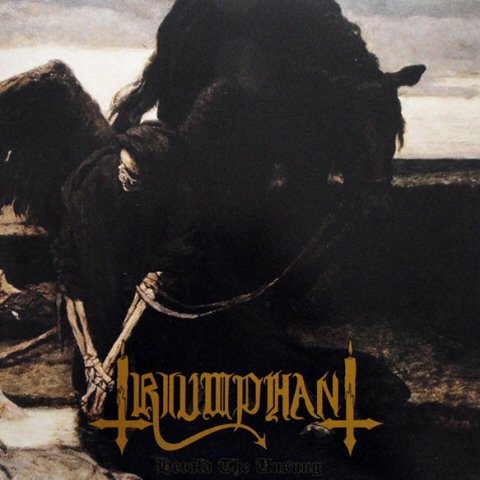 Reduced price due to cover being ex-

Austrian Thrash / Black Metal outfit Triumphant make their start as a band with their debut. Herald The Unsung, a very inviting name for a music album. Before talking about the release further it’s obligatory to know that this record speaks diversity. In fact the main essence of the album is diversity. The album sounds like an amalgamation of Toxic Holocaust and Ad Hominem, if I’m to choose my own personal combo. It has its very evil atmosphere to pull extreme metal fans and it has a very good cocktail of Thrash and Black Metal. Moreover, it has enough musical elements to keep any listener coming back for another repeated listen. Triumphant does an outstanding job with their debut album, and what I should give recognition to here is the major success of not sinking into mediocrity like most new bands that start out and are lost as to what they should be playing to sound Metal, or heavy. Good musical knowledge is present here, and the birth of such a record shows it all. Herald The Unsung starts heavy with Nachzehrer, and ends softly with Triumphant, maybe symbolizing the passage of time into death… but I’m just making things up now, no need to get deep on a Thrash Black record. If you love the evil side of metal I recommend the purchase of this release. It’s equipped with everything you’ll need and brings influences from many different angles of the huge metal circle to keep you satisfied.